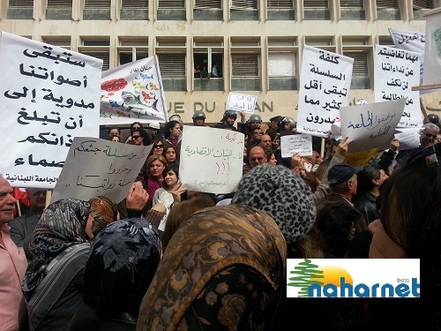 Education Minister Elias Bou Saab has announced the postponement of the official school exams from Thursday to Friday, after agreeing with the Syndicate Coordination Committee on the participation of its teachers in the monitoring of the exams.

However, the settlement reached between the two sides after several hours of strenuous negotiations does not involve any agreement over the correction of exam papers.

An earlier round of negotiations on Tuesday had reached a dead end, with the SCC announcing that it will not reverse its decision to boycott Thursday's exams.

“The SCC has not changed its stance,” said Nehme Mahfoud, SCC member and head of the private school teachers syndicate.

"There will be no exams on June 12 should Minister Bou Saab maintain his stance," another SCC member warned.

Earlier in the day, Bou Saab met with an SCC delegation at the ministry after a dispute over Mahfoud's attendance was resolved. The minister had accused Mahfoud of insulting him.

During the meeting, "the SCC apologized to Bou Saab over the insult ... telling him 'your dignity is our dignity'," several TV networks reported.

But in the evening, Mahfoud said "a member of the SCC clarified what happened to the minister and we did not make a mistake so that we apologize."

"My decision is almost ready and I will back it up with some facts before announcing what my conscience obliges me to do," OTV quoted Bou Saab as saying later.

"I do not bow to political pressure and my mission is ensuring balance between the teachers' rights and the students' interest," the minister added.

Earlier, head of public employees association Mahmoud Haidar announced a general strike from June 11 till June 19 at all ministries and public institutions to press for the approval of the stalled new wage scale.

On Tuesday morning, the SCC had kicked off an open-ended sit-in inside the Ministry of Education in UNESCO area to demand the approval of the wage hike.

Enraged public sector employees and teachers gathered inside the ministry, shouting slogans and holding banners that reject the ongoing delay in endorsing the draft-law by lawmakers as the parliament failed to reach a breakthrough over the controversial dispute.

Head of Public Secondary School Education Teachers Association Hanna Gharib called on SCC protesters to remain at the Ministry of Education, announcing that the committee will kick off an open-ended strike.

He accused lawmakers of holding the Lebanese people as “hostages.”

“The official exams will not be held,” Gharib told demonstrators.

Earlier on Tuesday, Bou Saab held talks with Progressive Socialist Party leader MP Walid Jumblat, who announced a day earlier that his parliamentary bloc would attend the legislative session but would not approve the pay hike draft-law.

A behind closed doors meeting was also held between Speaker Nabih Berri, Bou Saab and Finance Minister Ali Hassan Khalil ahead of the parliamentary session.

However, Berri postponed the session to June 19 after the parliament failed to convene over lack of quorum anew.

Only 54 MPs attended the session.

“The official exams cannot be held in this manner,” Berri said after talks with Bou Saab.

He stressed that the “public institutions shouldn't be obstructed.”

Bou Saab told reporters later on that he “agrees with Berri's stance on official exams,” expressing regret for being compelled to take such a decision.

“The solution for the controversial dispute is political,” the minister said.

He vowed to continue the battle, adding: “We support the adoption of a balanced wage scale.”

“The decision to carry out official exams is in the hands of the Education Ministry only.”

The March 14 alliance held a press conference at the parliament, reiterating their complete rejection to the new wage scale over the economic risks it poses.

The SCC is angered by the failure of lawmakers to approve the new pay hike, and had continuously vowed to escalate its measures to pressure blocs into attending parliamentary sessions set to discuss the matter.

The SCC, a coalition of private and public school teachers and public sector employees, had called for a two-day strike, starting Monday, after the Education Minister pledged to hold the official exams on time even if parliament failed to approve the pay hike.

Official exams for Brevet (BR) students were scheduled to begin on Thursday. However, under the deal reached late Tuesday between the SCC and Bou Saab, the exams will be held on Friday.

Bou Saab reiterated in comments ahead of his meeting with Berri that the official exams will be carried out “no matter what.”

He expressed hope that a positive breakthrough would occur regarding the new wage scale.

The minister welcomed the sit-in held by the SCC at the Ministry of Education, saying: “It is the right place for them to protest and not the streets.”

“The concerned teachers will not lose their way,” Bou Saab said.

Students from public and private schools participated in the SCC's protest on Tuesday, expressing solidarity with it.

Mahfoud also lashed out at the head of the Mustaqbal parliamentary bloc Fouad Saniora, accusing politicians of leading the country towards “bankruptcy.”

On Monday, Saniora announced that al-Mustaqbal bloc will not take part in “pushing the country towards bankruptcy.”

Finance Minister Khalil also criticized Saniora's comments, saying: “I am concerned with maintaining the financial stability in the country and rectifying the old policies adopted by previous officials.”

He pointed out that the endorsement of the new wage scale would decrease the budget deficit.

“We already had an agreement over the matter but some parties overturned it later on,” the minister continued.

This is were I say the M14 block and Jumblat are just interested only in their pockets.

Unlike sheep of the M8 who agree to anything nASSri Berry say.

I will NOT agree with M14 on this.

INFLATION ON WHAT ?
TV , CARS, .... Everything that is imported will NOT have an inflationary effect.

But your vegetables fruits, services yes... Of course...

But then again when people have a greater disposable income then they WILL SPEND IT... Thereby driving the economy to new heights ,,,

All politicians in Lebanon own some sort of business, and they are only concerned with raising their employees salary.

bravo! the gvt has been mocking these demand for 3 years now! they only ask for legitimate rights! their salary is the same since 1998!

are the prices been the same now than in 1998? the politicians are just a bunch of incompetent fools more anxious about their privileges than those of the lebanese people!

This is were I say the M14 block and Jumblat are just interested only in their pockets.

Unlike sheep of the M8 who agree to anything nASSri Berry say.

I will NOT agree with M14 on this.

INFLATION ON WHAT ?
TV , CARS, .... Everything that is imported will NOT have an inflationary effect.

But your vegetables fruits, services yes... Of course...

But then again when people have a greater disposable income then they WILL SPEND IT... Thereby driving the economy to new heights ,,,

All politicians in Lebanon own some sort of business, and they are only concerned with raising their employees salary.

This is the proof of the failure of the Lebanese state with all its M8 and M14 components.

We need a revolution NOW!!

what do you do when you have a broke government???

what do you do when you have an absurd inflated and sickening ratio of 1 teacher for every 7 students imposed by politicians for obvious personal gains??? ( as a reminder the average is 1 in 20 in developed countries)

what do you do when the scc heads insist on having pay raises for everyone including teachers and employees with monthly salaries over 3000$ by the way, ask those leaders about their own salaries???!!!

what do you do when you have soma people that don't dare to protest against those fucking up the economy and the country by interfering in foreign wars and creating their own militias and in the same time they the government for pay raises???!!!

they ask the government for raises

ghzayel sorry but you don't make sense...khalet She3bein bi Ramadan....you don't know who to complain about so you shoot left and right...

what I am saying is since the government is on the edge of bankruptcy priorities should be set straight and some teachers and gov employees deserve pay raises more than others ie those making more than 3000$ a month.

NO!
what about the sea shore which belongs to the Lebanese people?
what about the mountains which belong to the Lebanese people and how the money sucking politicians keep destroying them for stone and rubble to make money?
what about the corruption among policemen-bikers who regulate the parking spaces in the main roads? Who is taking these millions of dollars from the restaurants?
what about the people who buy their citizenship on the last day the president is ruling, where did that money go?
what about all the drug money? who is covering these drug dealers politically and legally?
THIS IS NOT AN M8 or M14 ISSUE!!!
ALL POLITICIANS ARE CORRUPT! OUR POLICE FORCE IS CORRUPT!
WE NEED A NEW STATE! WE NEED NEW POLICEMEN!
NO MORE BLOOD SUCKING MONEY SUCKING HEADS OF CLANS WHO PLAY WITH THEIR SHEEP!
THAT GOES FOR ALL SIDES!
ENOUGH IS ENOUGH!!!!!!!

what about people who are 80 year old and cannot afford to stop working because they have no retirement plan!!!!