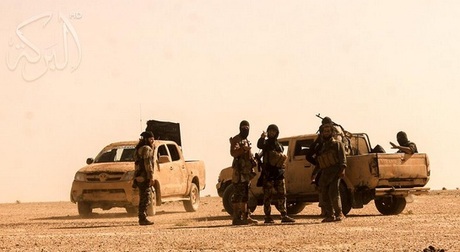 Jihadists were pushing towards Baghdad Thursday after capturing a town just hours to the north, as the U.S. mulled air strikes in a bid to bolster Iraq's collapsing security forces.

With the militants closing in on the capital, forces from Iraq's autonomous Kurdish region took control of Kirkuk, an ethnically divided northern city they have sought to rule for decades against the objections of successive governments in Baghdad.

Iraqi Foreign Minister Hosyhar Zebari acknowledged the security forces which Washington invested billions in training and equipping before withdrawing its own troops in 2011, had simply melted away.

Russia said the lightning gains by the Islamic State of Iraq and the Levant (ISIL), a movement so radical it has been disavowed even by the Al-Qaida leadership, showed the pointlessness of the 2003 U.S.-led invasion, carried out in the aftermath of the 9/11 attacks in the United States.

Washington found rare common cause with its longtime foe Tehran, with both voicing dismay at the Sunni extremists' advance and pledging to boost aid to Iraq's beleaguered Shiite prime minister.

The militants, who have swept up a huge swathe of predominantly Sunni Arab territory in northern and north-central Iraq since launching their offensive in second city Mosul late on Monday, advanced into ethnically divided Diyala province.

And later in the evening, the militants seized two strategic areas of Diyala northeast of Baghdad, after security forces withdrew, officers said, bringing a militant offensive closer to the provincial capital Baquba.

Jalawla and Saadiyah are the latest areas to fall to a lightning three-day militant offensive that has swept down from northern Iraq, overrunning all of one province and significant parts of three others.

The insurgents also captured the town of Dhuluiyah just 90 kilometers (60 miles) from Baghdad, army officers said, as they pushed into a province whose mixed Arab and Kurdish and Sunni and Shiite population has made it a byword for violence ever since the 2003 overthrow of Sunni Arab dictator Saddam Hussein.

ISIL spokesman Abu Mohammed al-Adnani vowed the jihadists would not stop there, but would press on to the capital and the Shiite shrine city of Karbala, visited by millions of pilgrims from around the world each year.

The Shiite-led government in Baghdad has been left floundering by the speed of the jihadist assault.

Prime Minister Nouri al-Maliki said he would seek parliament's authorization to declare a state of emergency but MPs failed to muster a quorum for the vote on Thursday.

Only 128 out of 325 MPs showed up for the session, which was announced two days before, a senior official said.

The swift collapse of Baghdad's control comes on top of the loss of Fallujah, west of Baghdad, at the start of the year. It has been a blow for Western governments that invested lives and money in the invasion that toppled Saddam.

The Iraqi foreign minister, a Kurd and a longtime British exile, acknowledged the collapse of the security forces in Mosul and other cities had been precipitate, with many personnel simply melting away after discarding their uniforms.

"It is a setback definitely for the Iraqi security forces, who collapsed in the largest city and abandoned their weapons and equipment," he said.

Zebari said the security forces were mounting a fightback in Tikrit -- the hometown of the now executed Saddam -- and residents reported an air strike on the dictator's former palace in the town.

Washington is considering several options for offering military assistance to Baghdad, including drone strikes, a U.S. official told AFP on condition of anonymity.

Resorting to such aircraft -- used in Afghanistan, Pakistan and Yemen in a highly controversial program -- would mark a dramatic shift in the U.S. engagement in Iraq, after the last American troops pulled out in late 2011.

State Department spokeswoman Jen Psaki said the U.S. was committed to "working with the Iraqi government and leaders across Iraq to support a unified approach against ISIL's continued aggression."

But there is no current plan to send U.S. troops back into Iraq, where around 4,500 American soldiers died in the bitter conflict.

And NATO chief Anders Fogh Rasmussen said he saw no role in Iraq for the Western alliance in the battle against the thousands of jihadists, among them many Westerners, fighting in both Iraq and neighboring Syria.

Russian Foreign Minister Sergei Lavrov said the spectacular collapse of the Western-trained Iraqi army exposed the failings of the 2003 invasion.

"The events in Iraq illustrate the total failure of the adventure involving the United States and Britain," he said.

Iranian President Hasan Rouhani went live on television to denounce the "extremist, terrorist group that is acting savagely" in Iraq.

He said he would meet later with the Supreme National Security Council, which would have to approve any military support Tehran might want to provide to Baghdad.

Turkey said it was holding talks to secure the release of dozens of its citizens kidnapped by Islamist militants in northern Iraq amid international calls for their release.

"We are in touch with all the groups in Iraq including Kurds and Turkmens," a government official told AFP.

The city of Kirkuk, which Kurdish forces took over on Thursday, has Turkmen and Christian minorities as well as a substantial Arab population, some of it deliberately settled by Saddam to undercut historic Kurdish claims to the province's oil wealth.

The Kurds have never given up their claim to the city, returning to war with Baghdad in the 1970s to press their demand for the city to be incorporated in their autonomous region in the north.

The Kurdish minister responsible for the autonomous region's former rebel security forces was targeted by a bomb attack as he made an inspection tour of the city's outskirts on Thursday but escaped unharmed.

Kirkuk Governor Najm al-Din Karim said Kurdish forces had filled in gaps left by Iraqi soldiers who withdrew from their positions in the province.

"Army forces are no longer present, as happened in Mosul and Salaheddin," Karim said.

and I thought that the Lebanese were the most stupid of the Arab race..

During his tenure Maliki managed to piss everyone off most sunnis and kurds and many shiites but buoyed by the hardline iranians he thought he can rule like king, now he needs all iraqis to stand together to help him clean his mess. The US and Iran should have listened to the people of Iraq and respected their wishes by letting the Allawi the man who won the elections with his wide coalition rule.

lagalleria, you are totally right!
Ayyad Allawi would have unified Iraqis and that would have been a great for the whole region.
But Israel and the US would rather have extremists and secterians in power...look at the result!

i repeat, I thought that the Lebanese were the most stupid of the arab race. I was wrong. They are 1st runner up!

Soon to a cinema near us! Lord Sykes and Monsieur Picot's agreement are being replaced by Lord Abu Bakr Al Baghdadi and Monsieur Khamanei!

Soon to a cinema near us! Lord Sykes and Monsieur Picot's agreement is being replaced by Lord Abu Bakr Al Baghdadi and Monsieur Khamanei!

I think the producer is going for the Levant Triology and then will have a Saudi and Maghreb special episodes.

no shias in maghreb...

partition is on the way for Syria, Iraq and turkey, where the Kurdish state will be created soon.
as well the alouite state is taking shape, and what is left to partition is Lebanon.

these thugs want our country.

turkey ? they'll genocide anybody trying to touch at their land...
No mess with the kardash...

The world has turned into savages all the world keeps oppressing, now feel their wrath upon you!! كونوا غلظاء أشداء على أعداءكم!! Said Allah in his holy book!!

So the US arms FSA-Al Qaeda in Syria, but air strikes them in Iraq?

arm them karimo ? with invisible weapons and tanks ?

strange for you karim as your binary mind cannot understand who ISIL are! LOL

Iraqis are a great people. Iraqis are great doctors, engineers, scientists. They were secular. They did not distinguish between Iraqi Kurd, Sunni, Shia, Jew or Christian.
Then Israel came along and the cold war kicked in. The king was torn apart and the dictators rolled in. And then came the foreign invasions that completely obliterated the country. And now after all these years, nothing is left. The educated class has left a long time ago and is thriving in the US, the Gulf and the UK while Iraq is stuck between Maliki and ISIL.
God help this great nation.

How come hariri and his thugs are quiet on Iraq? Time that terrorists isil get eradicated from the face of earth once for all, starting with taking out terrorist ksa with its criminals.

i love idiots from M8 and their logic... they say that:
-ISIL is financed by saudis
-that maliki is US ally
then how come saudis go against their US allies!? LOL

but when we give them another logic more sensible they bark and insult!!! LOL

ISIL came in syria, never attacked bashar army and gave way to an excuse from hezbis to intervene...
iran also proposed to maliki (then to the US according to M8's logic) to help them!

but no... M8ers prefer to look ridiculous than to assume that ISIL is on their side! LOL

oh! and for your question, figure it out yourself...very easy to understand... as you pretend to be smart you should know the answer.... otherwise you are just a retarded empty brain....