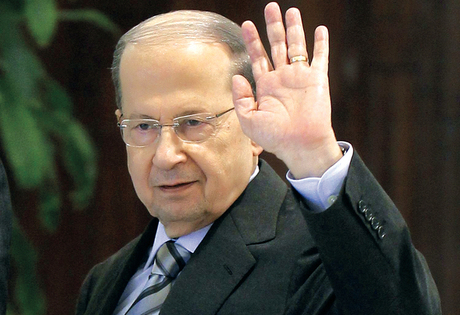 Former President Michel Suleiman left office on May 25 without a successor to take his place in the coming six years as differences between the March 14 and the March 8 coalitions prevented the election of a new head of state.

Aoun has announced that he would only run for president if he was presented as a consensual nominee, particularly eying the support of al-Mustaqbal Movement.

Separately, Aoun also telephoned Geagea on Friday to offer his condolences over the death of the LF leader's father Farid.

The Change and Reform bloc head had delegated MP Simon Abi Ramia to the northern city of Bsharri where Geagea is currently receiving condolences.

Farid Geagea passed away on Tuesday evening after he had spent the last three months of his life at the hospital for age-related health complications.

"we have an actual candidate everyone knows that.."

Anyone, and especially and Christian, who doesn't support Aoun for president is a traitor and a criminal.