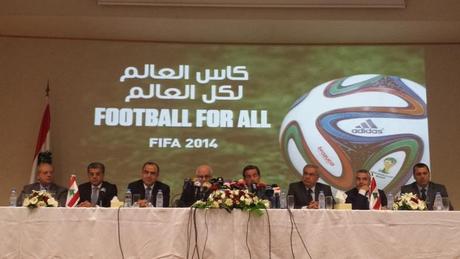 State-run Tele Liban broadcast its first 2014 World Cup match on Monday evening, although a deal reached between the government and beIN Sports' sole agent in Lebanon did not involve granting TL the rights to air the tournament.

Earlier in the day, Telecommunications Minister Butros Harb had announced that the Lebanese would be able starting Monday evening to watch the Brazil-hosted FIFA World Cup, which kicked off last week, without paying any additional fees.

“This is not piracy. Those who had usurped the Lebanese people's right to watch the World Cup are the ones practicing piracy,” TL chairman Talal al-Maqdessi told MTV.

Maqdessi gained the support of MP Simon Abi Ramia, head of the youth and sports parliamentary committee, who voiced dismay at “the nature of the agreement reached between the Lebanese state and the SAMA firm.”

In a phone conversation with Maqdessi, the MP asked that TL “begin broadcasting World Cup matches starting tonight and without any delay, so that all the fans of the World Cup can see the games.”

Minister Harb had stated during a joint press conference that the problem was resolved with SAMA, the sole agent of beIN Sports in Lebanon, and that “an agreement was reached with the agent which ensured that the rights of all sides are preserved.”

He added that SAMA had agreed to allow the Lebanese people to watch the World Cup through local cable companies.

“The government will compensate SAMA with USD3 million in funds for the company's losses. The telecom companies Alfa and MTC will take part in this compensation,” the Telecom Minister added.

Harb noted that under the deal, TL would not be granted the rights to broadcast the games.

Maqdessi lamented the decision and stressed that “Tele Liban will broadcast the games even if that cost me my resignation.”

The National Media Council expressed reservation on the agreement which fell short of allowing TL to broadcast the tournament to citizens who do not have cable subscriptions.

For his part, Information Minister Ramzi Jreij stressed that the Lebanese people's right to watch the World Cup should take precedence over the interests of a commercial company.

On Friday, cable providers in Lebanon had criticized the state for failing to address the issue of broadcasting the World Cup.

Dear Mr. Information Minister : there is no such thing as a "right to watch to world cup".

Watching football is not a human right !

And if you do believe in Human Rights, then the archaic institution you call "ministry of information" should be abolished along with all its censorship practices.

so we don't have money to correct public sector employees salaries that have been frozen since 98.....but we have money to spend on world cup broadcasting rights that won't even benefit our national broadcaster....What a shame.

Opium of the masses, while they steal right and left, they give you the world cup to watch....shut up ....and feel they have achieved something..... We might even call to elect Boutros Harb as president after this "achievement"

Harb achieved more in 3 days to make the Lebanese happy than poor little rich kid Nekte Sahnaoui and Gerban Barteel did in their ministerial lives.

The recipe to happiness (without the KFC)...If only more people took it up in Syria, Iraq and Lebanon. How peaceful the whole place would be.

typical Lebanese....the most pathetic thing showing how low our state went just happened...and you care about your 100 bucks....Do you also ask yourself why haven't public sector employees salaries been corrected in 16 years? Do you wonder how it could decrease corruption? do you wonder why we keep on voting for the same war mongering dinosaurs over and over?

The government did not sign yet! As of now, tele liban has NO rights of distributing the world cup only terrestrial cables has the right if they go BUY a receiver + card from sama (digitek). if i understood correctly all illegal cables can put the mondial except the legal cable providers like TL, cable vision, etc.. NO satellite dish providers!!! so the government will pay 3 millions to sama for all the "lebanese" people....some lebanese not all lebanese.... Sama wants to eat the whole cake + the cherry and on top the cream on the cherry. This company is like a vampire that tries to suck every last drops of blood it can!!! Also a government that does not respect its own channel(TL) is not a government!!!! For all the people that did pay, No Refund.

This conference is a farce!!! The ministers have been laughed on by this company!

I am amazed about how we can bring everything back to extra-terrestrial conflicts....Get real guys, wake up!!! we have a piece of shit we call a state and its not because of Hezbollah or Mustaqbal or FPM or LF or PSP or Marada or Amal or tachnak or I don't what other shitty party with three followers......its because of all of them combined and instead of checking what's happening on Mars lets focus on voting these people out by ballot box or by force whichever is more efficient

I guess you are living on the moon sir? You should come to visit us here in the Levant where people would rather kill one another for any excuse than vote to better their lives.
A little football will act like Prozac for us all.

Football Opium is better than Islamo-fascist cocaine. Much safer.

In both cases FIFA gets a cut, albeit a tiny one in the second case.

These days... you find everything online.

Ok so we will be able to watch and see
Fifa, brazil, and drink pepsi...
Cool. Cool. I am really thrilled.
Cant wait till the chicken gets grilled.
Tonight, im watching with open arms.
I love this country, i love its charms.
But just one problem, how did i forget.
Icant find a job, haven't bought a tv yet.
Figures.

give lebanese their daily shot of religion and football, you will turn them into brave brainless sheep...