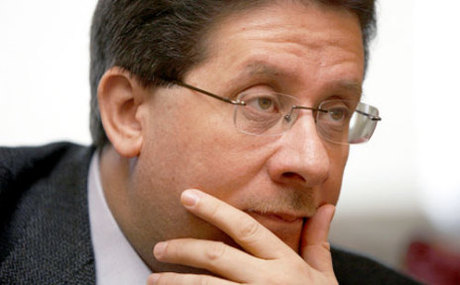 The Change and Reform bloc declared on Tuesday that the region's latest troubled developments prove that the Free Patriotic Movement's stances aimed at protecting Lebanon.

"We are all witnessing extremism in Iraq and the acts of Islamic State of Iraq and the Levant and when we look back at some of (FPM leader) General (Michel) Aoun's statements in 2006, we note that he warned of the region's dangerous situation and of the Sunni-Shiite strife,” MP Ibrahim Kanaan said after the bloc's weekly meeting.

He continued: “It is necessary for us as a parliamentary bloc to point out the openness inside Lebanon, and to those who are asking what General Aoun is doing we tell them to go back to his statements years ago as the accord (with Hizbullah) back then and later the dialogue with al-Mustaqbal Movement all aimed at protecting Lebanon.”

“Time after time the developments in the region prove that what we are doing is in Lebanon's interest and we have been crucified more than once,” he stated.

Kanaan refused to share with reporters more of what was discussed during the lawmakers' talks, noting that Aoun will cover other issues during an interview on OTV on Tuesday night.

“It is in the interest of all Lebanese and of all concerned parties to listen to General Aoun tonight, and hopefully his interview will have a positive impact,” the MP considered.

Regarding the highly contentious new wage scale, Kanaan expressed that the bloc is not particularly “optimistic” in this regard.

"But we said there is an attempt to reduce misunderstandings between blocs and put all numbers in the hands of the Ministry of Finance,” he said.

“We will hold talks for two days before the parliamentary session,” he revealed.

LOL and when we look back at prior statements from the same general he said that Lebanon will not be at peace till the assad regime remains, that hezbollah was a terrorist militia, that syria was the main cause of lebanese corruption, that... that...

his statements only prove that he changes his speeches according to his own interests... and never lebanese interests!! LOL

@FT : Idiots are people like you who don't seem to understand the first thing about this MOU ! It's BS !

There isn't a single mention of "Islamists" and "Terrorists" and fighting Sunni extremism is there ?

The MOU is VOID / NULL ! It's been breached by Hezbollah and Aoun like a puppy turns a blind eye !

How can you respect a leader whose partners are stepping all over him.

It was never in Hezbollah's "Mandate" to protect Lebanon from Islamists or protect Bashar.

isil was insignificant before 2013 ya FT...stop eating those mushrooms... and the only K9 is you... for feeling that you need protection from Hezbollah... the Christians of Lebanon need nothing from your bearded friends, or no other fundamentalists!

How can you state that ?

1- Your partnership with Hezbollah is a joke ! They breached your MOU so many times. Using their weapons for anything else other than "liberating Lebanon from occupation" or defending Lebanon from Israeli aggression is a flagrant breach of your MOU

We are all Aounies. Problem is Aoun is no longer a Aounie !

Fight for your beliefs and stop fighting for putting your ego-centric self loving dictator Wanabee Aoun in power !

If you go back far enough, Aoun called Hezbollah a terrorist organization and Assad a terrorist sponsoring state. How can anyone with any credibility say look to what Aoun has said in the past to judge the accuracy of the man. He has said whatever is necessary to advance the interests of Aoun.

The fact is that he has been the most destructive force within Lebanon since he first came onto the scene. The history is known, but just in the last 10 years, he has taken the place of the Assad regime to provide Hezbollah with political cover to continue Hezbollah's erosion of Lebanese state institutions. Aoun has participated in the divide that weakens the Lebanese Christian political parties so that they have all ben ineffective. Aoun's blind pointless ambition to become President has served the interests of his paymasters in Iran by paralyzing Lebanese State institutions so as to increase the power of Iran's power projection instrument, Hezbollah inside of Lebanon.

And finally, Aoun's support for Assad is THE most inexcusable about face act of treason that any Lebanese has engaged, including Eli Hobeika. Assad has occupied Lebanon, made war on Lebanon, used Sunni Fundamentalist proxies to try to break Lebanon; Assad has unleased ISIS the hated Fundamentalist "tikfiri" against whom Hezbollah fights with Aoun as the cheer leader, but it is Assad who has fostered this to discredit his Opposition and to make the war to oust him a now dangerous regional sectarian war that threatens to engulf Lebanon into the flames of irrational religious war. This is the wisdom of Aoun. The wisdom of a complete idiot.

Ibrahim Kanaan striking the pose of "The Thinker" is a joke of the first order. There is more brainpower in the concrete head of the statue by Rodin than is between the ears of Mr. Kanaan.