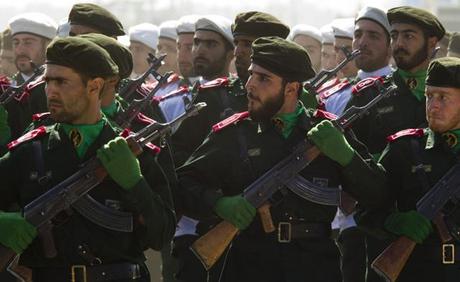 Iran has sent "small numbers" of operatives into Iraq to bolster the Shiite-led government in Baghdad but there is no sign of a major deployment of army units, the Pentagon said Friday.

"There are some Iranian revolutionary operatives in Iraq but I've seen no indication of ground forces or major units," spokesman Admiral John Kirby told a news conference, apparently referring to Tehran's Quds force, the covert arm of the Revolutionary Guard Corps.

His comments marked the first public confirmation by the U.S. government that Iranian operatives had crossed into Iraq, where the Baghdad government is struggling to counter the swift advance of Sunni extremists.

"Their interference in Iraq is nothing new," Kirby said.

But the United States and Iran now find themselves sharing a common interest in helping Iraqi Prime Minister Nouri al-Maliki fend off the onslaught by Sunni militants from the Islamic State of Iraq and the Levant (ISIL).

The Pentagon offered no further details on the nature of the Iranian presence or their operations, amid media reports that Tehran had launched a major effort to shore up Iraqi forces.

"I'll let the Iranians speak for their activities," he said.

"We have indications that there are at least some operatives inside Iraq" he said, saying the alleged deployment amounted to "small numbers" of agents.