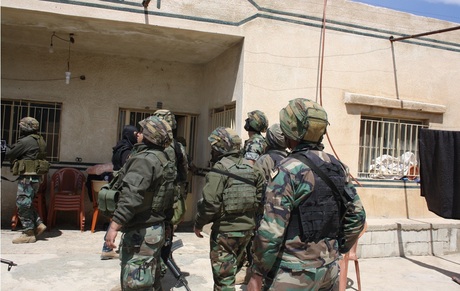 Five people were arrested on Sunday in the Bekaa region on suspicion of plotting an act of terror.

“They were referred to the relevant judicial authorities and an investigation is underway,” NNA added.

Meanwhile, Voice of Lebanon radio (93.3) said the army arrested “five Lebanese and Syrian gunmen, among them Omar al-Satem, who were en route to Arsal.”

It described al-Satem as “one of the most dangerous fugitives,” saying the militants were arrested a checkpoint in Baalbek on suspicion that they were plotting an act of terror.

Later on Sunday, the Army Command issued a statement saying the five suspects were arrested at the Hrabta-al-Labweh checkpoint in coordination with the intelligence directorate.

It identified the detained men as “Lebanese nationals Omar Mnawer al-Satem -- a cousin of the terrorist Qutaiba al-Satem who had blown himself up in Haret Hreik – and Ibrahim Ali al-Braidi, in addition to the Syrians Atallah Rashed al-Berri, Abdullah Mahmoud al-Bakkour and Jawdat Rashid Kammoun.”

The statement said they were arrested on suspicion of belonging to a terrorist organization.

Meanwhile, al-Satem family, which hails from the northern region of Wadi Khaled, issued a statement clarifying that Omar Mnawer al-Satem who was arrested by the army “is not the fugitive wanted by the Lebanese state” and that the name of his mother is Suad.

“The fugitive is called Omar Ahmed al-Satem and the name of his mother is al-Sheikha,” the family clarified.

On Friday, a suicide car bombing rocked an Internal Security Forces checkpoint in the Bekaa area of Dahr al-Baydar, killing an ISF member and wounding over 30 people. The blast went off only 200 meters away from the convoy of General Security chief Maj. Gen. Abbas Ibrahim but it is still unclear if he was the target of the attack.

The majority of suspects were freed but investigations are ongoing with three of the individuals who were arrested at one of the hotels, reported the daily al-Mustaqbal on Sunday.

It said that one of the suspects is a French national with Arab origins.

What brings a person to carry an act of suicide bombings, take your own life and the life of others for political agendas is Horrific. Its actually haram in any Religion. Did no one tell these young men this. Or does the power of money play a major role of blackmail and brainwashing. As a Muslim I am disgusted in the number of men who would hurt others for political and financial gain. At this rate surely the number of women to men ratio across the middle east will rise and maybe leave very few good ones POSSIBLY

What brings a person to carry an act of suicide bombings...

Sorry but I do not understand what you mean. Please explain. Thks.

I am not comparing anything. Just making a comment.

Are you saying it is ok for a young Hezbollah recruit to carry out a suicide bombing attack against his enemy but not ok for an ISIL member to carry one against his?
Or are you saying that it is ok for a young ISIL member to blow himself up, killing a member of our police force because he considers him the enemy and not ok for Hezbollah to sanction suicide bombing against their enemies?

I am saying that both cases are insane.

machia, isil, nusra, alqaida in lebanon, iraq and syria are consequences of the oppression of sunnis in lebanon, syria and iraq by the likes of hezbollah and bashar... Sunnis are so oppressed than they'll back anybody helping them...

watch these videos, it does explain all happening in MENA...

Her is my few cents to Cedre. I am halfsunni half shite.please get it facts straight. 1. It was and still, Shiites are oppressed in the Arab world. 2. In 2006, the Shiites were not yet in power when those made people distroyed the Shiite holeest shrine. Since then, on a daily basis, a suicide maniac murders innoncent chikdren, women and men. Please Google 2006 bombings till now.

Oppression certainly does not justify suicide bombing. If it did, 90 percent of the world population would blow themselves up.
Suicide bombing and terrorism in general is inhumane, criminal and stupid.
If you feel oppressed Cedre go demonstrate and demonstrate and again. Make your voice heard loud. But peacefully. Use media to convey your message.
Take the first Intifada as an example, it was extremely successful because it the Palestinian was the David against the Israeli Goliath.
The moment the Palestinians took arms and used suicide bombing was the moment their cause was lost.

I wish Nassrallah would enter the heaven soon with his 70 virgins..

Nasrallah sanctioning suicide bombings against the enemy and comparing it to a sauna:
https://www.youtube.com/watch?v=knAA-glMEEM

Actually Hezbollah are amongst the first suicide bombers and took pride in their achievements of murdering people by the hundreds at their suicide bombing "heights".

To sum up, there is no difference between Hezbollah and other Sunni terrorist organisation. They all have the same roots and ideologies !

And only the army.

Please full-disclosure can we not be sectarian. We are all humans and we are all the same. People differentiate themselves the better they treat others and the more they strive to be better.
Remember we are all Lebanese trying to find a solution to our troubles.
We all abhor terrorism, violence, murder, assassinations and crime, whether committed by a Christian, Jew, Sunni, Shia, Buddhist or atheist.
We all love those who do great acts of charity whether they are Shia, Sunni, Christian, Jewish, Buddhists, Hindu or atheists.

Extremists regardless of affiliation are nothing but a cancer to civilized society. God bless the Army ONLY, one can't support the army yet support foreign militias either at the same time.

This is so racist.

let them blow themselves up. ever heard of natural selection? we should simply let nature do its work, and allow this family of freaks to rid humankind of their recessive suicidal genes.