Shaar Says Not Running for Grand Mufti Post Unless Consensual 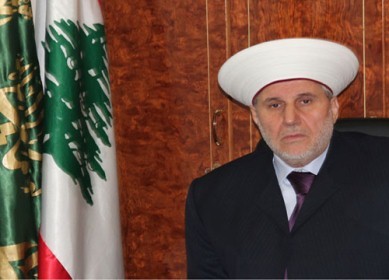 The Mufti of Tripoli and the North Sheikh Malek al-Shaar stressed on Friday that he will not run for the Grand Mufti post but said that he will not hesitate to assume the tasks if there was consensus on him.

“I will not submit my candidacy for the post but if the rivals agreed on my nomination I will not hesitate,” Shaar said in a press conference.

Early in June, the head of Dar al-Fatwa's Islamic Endowments, Sheikh Hisham Khalifeh, called for electing a new Grand Mufti in August, but this announcement was met with the opposition of the Higher Islamic Council led by deputy chief Omar al-Misqawi, who demanded the elections to be held as soon as possible.

Shaar urged the people of the North and Tripoli to return to their religions values, stressing that the “Islamic and Christian values call for love, which should be applied in the political and daily life.”

“Each and every Lebanese is obliged to maintain the state's entity and the unity of its land and people,” the mufti said.

“Values should prevent us from acting upon our previous grudges.”

Shaar pointed out that there should be no arms but that of the state, calling on Hizbullah to aim its arms towards Israel.

Aoun's sickness is contagious becoming an epidemy ! It's time to put them all in quarantine !

'grand' mufti 'elections' ? what a joke, bunch of muppets, sheikh salem is our mufti and has our respect, from saida to wali khaled and from beirut to arsal...