Moqbel after Security Meeting: We Won't be Lenient with Terrorism 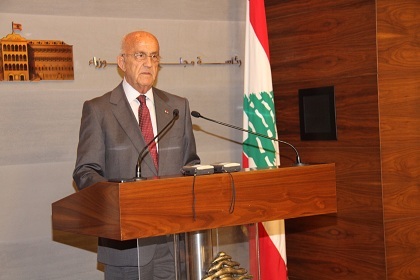 A high-level security meeting held Wednesday at the Grand Serail vowed to show no leniency in the face of terrorism, reassuring citizens that the situation is still under control.

“We stress that we won't be lenient with terrorism under any banner and this phenomenon is alien to the Lebanese society,” Defense Minister Samir Moqbel announced after the meeting.

“We emphasized that coordination will continue among the security agencies, which are at the highest level of readiness to confront terrorism,” added Moqbel.

The minister pointed out that the army will maintain the "utmost level of readiness."

"Until the moment everything is under control," Moqbel said.

"Security plans are being implemented in all areas and very soon in Beirut," he said in response to a reporter's question.

The conferees pledged to join efforts to spare Lebanon the repercussions of the regional turmoil, the minister added.

And despite acknowledging that the security situation is “delicate,” the officials noted that not all media reports about the latest security developments are necessarily accurate, urging citizens to “trust their army and security forces and their ability to foil any plot aimed at undermining their civil peace.”

The meeting was held under the chairmanship of Prime Minister Tammam Salam and attended, in addition to Moqbel, by Interior Minister Nouhad al-Mashnouq, Army chief General Jean Qahwaji and the chiefs of the other security agencies.

"The raids in Tariq al-Jedideh are interconnected and part of the preemptive security plan that security agencies are implementing to bust terrorist cells," Qahwaji said as he entered the security meeting.

One person was arrested and a car was seized as troops raided several places in Beirut's Tariq al-Jedideh earlier in the day in search for suspects.

Heightened security measures are being implemented across Lebanon in the wake of a number of bombings that rocked several regions.

Last week, a Saudi suicide bomber blew himself up at the Duroy Hotel in Beirut's Raouche area as General Security agents tried to storm his room. His accomplice, also a Saudi citizen, survived the blast and is being questioned.

Suspected terrorist cells were also dismantled in the northern region of Akkar and the eastern Bekaa province.

Also in June, a suicide blast at the entrance of Beirut's southern suburbs, Hizbullah's main bastion, killed a security officer and wounded 20 others.

Hassan Nasrallah should have listened to 2007 Hassan Nasrallah and stayed home, Lebanon would have been spared the all the terrorists attacks and the senseless deaths. When he crossed the border he was warned although he knew what the consequences on Lebanon and the Lebanese were going to be. But still did it and he lied inventing pretext after pretext to cover these lies. But he had no choice, the Ayatollah ordered Narsrallah followed the orders, what else could a lowly soldier do.

It's ok you won't understand everything but it's called taqqiya.

Only to be used at a time of war or threat. HA has been under threat since its existence.

Don't take every said to be true.

A small advise take the opposite to what is said.

It's ok you won't understand everything but it's called taqqiya.

Only to be used at a time of war or threat. HA has been under threat since its existence.

Don't take every said to be true.

A small advise take the opposite to what is said.

All Salafist areas of Lebanon are potential terrorist sites. Move in and clean them up.