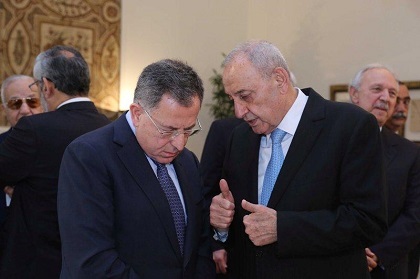 Dialogue between AMAL and al-Mustaqbal movements, which has kicked off following an initiative from Druze leader Walid Jumblat, did not tackle the issue of extending the parliament's term but rather Sunni-Shiite ties and the cabinet's work.

"The talks between al-Mustaqbal and AMAL focused on two issues: the cabinet's work during this difficult period and Sunni-Shiite dialogue aimed at defusing tensions," the sources noted.

The TV network, a mouthpiece of Hariri, said al-Mustaqbal movement's stance is "clear and well-known and it supports holding elections on time."

Jumblat has said that he mediated to bring AMAL movement, which is led by Speaker Nabih Berri, and al-Mustaqbal movement closer.

The meeting was attended by Health Minister Wael Abou Faour, who is Jumblat's aide.

The PSP chief said in his remarks published on Wednesday that he made his initiative out of his conviction that “we can't resolve our problems and hold the presidential elections without dialogue.”

“Dialogue is necessary more than before … particularly after the attack of the Islamic State and the regional developments,” he told As Safir.

Berri confirmed the “political dialogue” between Amal and al-Mustaqbal.

The rapprochement is necessary to resolve the political deadlock, he said.

The dialogue should be over whether or not the Lebanese are ready to veto the Hezbollah/Iranian hold on Lebanese presidential elections. Can they all get together and between and among them overcome this hold that is in place while Hezbollah is out in the region fighting Iran's wars in Syria and Iraq? I think M14, PSP and AMAL can do that. But the combination of FPM, Hezbollah, SSNP, Marada, Ba'ath is just enough to deny Parliament 2/3 or 86 Members present so that there can be a vote. Some real Patriotic FPMers need to end the boycott and allow a vote.

Beiruti... FPM and Aoun is the key to the Presidency. They are the largest Christian bloc with 21mps with the nearest Christian bloc of the LF with 6mps. If they want to end the vacancy then deal with them... Amal, mustaqbul and jumblatt is the did the same deal in 2005 parliamentary election to undermine Aoun and look what happened? Baabda was won with hezbollah, LF, kataeb, mustaqbul, psp, and amal against the FPM and Talal Arslan by less than 4000 votes. (Hezbollah and amal alone was estimated at 10,000 votes).... The path towards the president is with the FPM, whether you like it or not and maybe it's not Aoun but Jumblatt should be organising diologue with the FPM for a true solution otherwise a Henri Helou presidency will be a spit in the face of the Christian community and might end up uniting them instead.

Anyway a military coup would be best. End his sectarian political cancer.

Ado.australia, if Aoun is the key, then there is no door that bears a lock that this key fits. It opens nothing. Aoun does not have 21 seats in the current Parliament but has 19. His 19 seats boycotting does not deny Parliament a 2/3 quorum of 85 out of 128. But his FPM provides political cover for the others, Hezbollah, Marada, SSNP, Ba'ath so that they can block Parliament, but just barely. One or two need to come to their senses and the boycott will not stand and we can have a vote.

In my opinion they should do like the 1851 coup d'état in France...