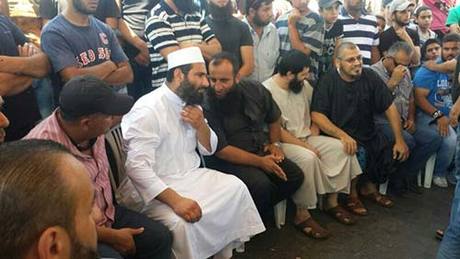 The families of Roumieh prison inmates decided to suspend their sit-ins in Tripoli as Justice Minister Ashraf Rifi warned on Saturday of "dragging the northern city back into the circle of violence."

"The inmates' families decided to reopen the roads until next Thursday after receiving promises from several Sheikhs and prominent figures in relation to their demands,” OTV reported on Saturday evening.

The demonstrators were protesting and blocking roads over the continuous imprisonment of their sons in Roumieh.

Radio Voice of Lebanon (93.3) said earlier in the day that army troops failed to reopen Tripoli's international road after it was blocked by protesters.

"Soldiers deployed on top of buildings in the city after number of demonstrators had increased,” VDL added.

Meanwhile, al-Jadeed television said another sit-in was held in the Souq al-Arid area to protest the continued blocking of roads in the city.

Justice Minister Ashraf Rifi commented on the latest developments in the North, considering that the “just cause” for which citizens are protesting is being "exploited by local political factions and certain security bodies to serve some personal interests."

"All the city's residents, regardless of their social status or their political orientation, are paying the price,” he noted.

Rifi called on the protesters to reopen the roads, assuring as well that their “message has been well-received.”

"We did and we continue to follow-up on your rightful cause... But we hope you would not be turned into tools in the hands of those trying to drag the city back into the circle of violence and of crises,” he said, addressing the inmates' families.

"This is not in your sons' interest and we assure you that we will not abandon them and we will exert all efforts to treat them fairly,” he stated.

In the same context, former Prime Minister Najib Miqati said some parties want to establish a link between Tripoli and turbulent security events.

The parties that have been financing and causing these events for the past three years are known and so are their motives, Miqati said in reference to al-Mustaqbal bloc.

"But the consequences and the arrests (that resulted from the Tripoli clashes) are now putting pressure on them (al-Mustaqbal),” he added.

He elaborated: “They believed the lies they had fabricated. They reached a settlement with yesterday's enemy, but the latter neutralized its allies while they pushed those that fought for them and in their names to prison.”

Security forces had carried out raids in Tripoli on Friday in search of fugitives, as many northern figures slammed the “arbitrary detentions” in the city.

The Islamic National Gathering lashed out on Thursday at the “arbitrary arrests targeting the sons of Tripoli,” warning that the “oppression of the Sunni sect will result in unexpected reactions.”

Al-Mustaqbal bloc, meanwhile, had said on Tuesday that many of the Tripoli arrests were based on investigations that were conducted under psychological and mental pressure, considering that this resulted in launching accusations of terrorism against people “who were merely tasked with carrying guns.”

Your sons would not be imprisoned if they weren't terrorists.

yep, those gunmen caused hundreds of dead and wounded, their place is in prison. rifi taking their side is once again showing where he stands

I am having hard time seeing on TV the battles between Jabal and Bab tebeneh, oops Rifi executed a security plan then innocent Eid disappeared? if Syrian Eid is innocent then why run away?
Those gunmen are the reaction for your continued action of kissing up and making Iran and Syria above Lebanon. You keep the Lebanese Armed Forces busy because of your actions and interference with other countries business such as 2006 Israel and 2012 Syria.

Crocodile tears from filthy terrorists. They should all be hanged.

So the nawar of Tripoli are stronger than the army??

Most of these Nawars are calling for trials and not indefinite detention. Compare this to the Hizb that protects criminals who are implicated in assassinations. The same treasonous party that invaded Beirut and many other places in Lebanon to overthrow a government.

the truth is if you kill or hurt or endanger a society no matter what party or sect you belong to You belong in jail. Should any of these trials go ahead and have their findings that some of the jailed have caused much grief to the country and caused bloodshed the law should be never let people back out into society. Simply because they will only cause more bloodshed to innocents. I personally dont like guns how and the only people that should be carrying them is the Army not every T D H.

problem is easy : judge them in a public not military court. Punish the guilty ones, jang the killers, but release the innocents.
People in Roumieh for years without judgement just coz they had a friend who did something or knows somebody who did oppose heziran.
We all know who controls military intelligence, we all know ow many traitors Bashar left in the institutions before leaving, awlad ghazi kanaan, may he burn in hell inshaAllah...