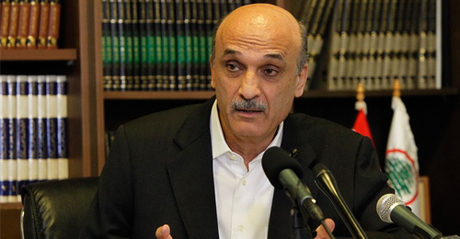 Lebanese Forces leader MP Samir Geagea voiced concern on Monday that the presidential vacuum is effecting the work of the cabinet and the parliament, describing it as a “crime” against the Lebanese.

“Maronite Patriarch Beshara al-Rahi's stance is righteous to press for a solution but things should be named as they are,” Geagea said, noting that parties should be held responsible for the delay in electing a new head of state.

On Sunday, al-Rahi lamented the presidential impasse, stressing that he rejects the “tragic” situation that has reached its peak.

The Christian leader and presidential hopeful said in remarks published in al-Mustaqbal newspaper that all parliamentary blocs are attending sessions set to elect a new president except for the Change and Reform and Loyalty to the Resistance blocs.

“Both blocs are impeding the polls for various reasons,” Geagea pointed out.

He expressed concern that presidential vacuum is negatively impacting the government and the parliament.

Asked about the recent row among cabinet members over a dispute on the appointment of deans at the Lebanese University, Geagea said: “For this reason we refused to participate in this government... Differences between the ministers didn't surprise us.”

“Two teams with each having its own political plan can not agree,” he said.

Geagea considered the “problem to be in the structure.”

Concerning the arrest of a suspect linked to the launching of rockets from South Lebanon towards Israel, Geagea wondered why those who fired thousands of rockets at Israel weren't also detained.

“No one has the right to set the country's military and defense strategies, which should concern all the Lebanese people,” the LF leader in hints to Hizbullah's intervention in Syria's raging war.

Security forces managed to arrest at a western Bekaa hospital one of the militants behind Friday's attack, after he was seriously injured while firing the rockets.

Geagea said that those who launched over the weekend rockets at Israel should be detained but everyone violating the country's security should also be apprehended.

The sad reality is that they think: by solving the presidential issue the problems will be solved .Untrustworthiness and hate among the citizens are rooted in the society . By sound education and equal rights, future generations ( some 50 years from now) ,may live a normal life.

haha listerine? Come on israeli, you can do better than that

hey why dont you mention the ta7alof LF used in the 05 elections with HA? Hypocrite much? roo7 ndab

"that support such antiquated politicians who lie to our faces and yet their sheep persist on clapping and cheering for the old goat."

Yea, seriously bro. Whats up with all those Geagea lovers? Do they not know he is a dinosaur warlord feudal sectarian scumbag? When will they ever learn huh?

Thanks foul disclosure for proving my point.

Yes spot on Hakim!!! Way to be a hypocrite and "boycott" whenever you like then point the finger when others do THE EXACT SAME THING YOU WERE DOING A FEW MONTHS AGO. Exemplary false hakim I must say. Not bought at all, purely independent thinker, never took a dime from a foreigner, never discriminated among Christians or between Christians and non-Christians. What a hero!!

I take it you are happy for your tax dollars going to state employees who do not perform their obligations then? As long as it serves the Persian masters cause then it must be ok. Thanks for clearing that up.