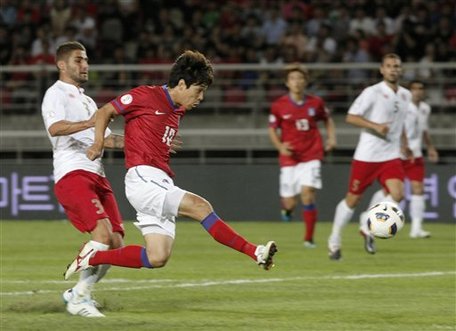 A hat trick by new Arsenal signing Park Chu-young lifted South Korea to a 6-0 win over Lebanon in their World Cup qualifier on Friday.

Ji Dong-won of Sunderland also scored twice as Korea outclassed the visitors from start to finish to take an early lead at the top of Group B in the third round of Asian qualifying.

South Korea is looking to qualify for an eighth successive World Cup and the three points were never in doubt after Park put the hosts ahead with a volley in the eighth minute.

Roared on by a capacity crowd, the Koreans continued to press and Ji hit a post before the second goal came when Park headed in a Ki Sung-yeung corner seconds before halftime.

Lebanon rarely threatened and was reduced mainly to speculative attempts from long-distance, but was hanging in there until Ji made it 3-0 in the 66th minute.

The Sunderland striker headed a cross into Park's path and though the ensuing shot was saved by the goalkeeper, Ji shot the rebound into an empty net.

Seconds later, Park completed his hat trick with a low shot from the right side of the area.

Kim Jung-woo got on the scoresheet in the 82nd minute and Ji made it half a dozen in the 85th.

"We won because all the players created space and showed great movement," Park told reporters after the match. "We all did what we were supposed to and in the end, it was a straightforward win."

South Korea travels to Kuwait for the second round of games on Tuesday.

"The away games will be much more difficult but we have what it takes to get a result," added the captain.

The top two from each group progresses to the final round of qualification. The other fixture in Group B was to take places later on Friday with United Arab Emirates at home to Kuwait.

After a 3-0 friendly loss to Japan last month, coach Cho Kwang-rae was pleased with how his team bounced back.

"It was a return to our old selves," said Cho."There were a lot of positives from the match but there is a long way to go. Kuwait is a better team technically than Lebanon and we now have to focus on that match and try to collect the points."

Lebanon coach Theo Bucker admitted that he had been more concerned with getting points against the Emirates on Tuesday than the unlikely task of avoiding defeat in Korea on Friday.

"More than coming here to win, we came to prepare for the next game," said the German. "Korea has some good players and I was impressed with the teamwork and the way in which the team moved the ball around.

"If Korea plays like this against Kuwait next week, it will be enough to win."