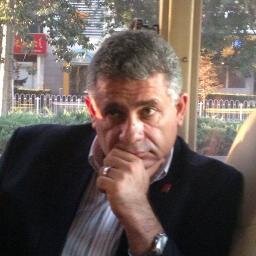 March 14 General Secretariat member and Naharnet Editor-in-Chief Naufal Daou survived on Saturday an armed ambush at the intersection of the Bekaa town of al-Tibeh.

"Gunmen showered Daou's car with bullets near al-Tibeh, damaging its wheels,” a statement released by the March 14 General Secretariat announced, noting that the attack took place at 11:00 am on Saturday.

The attackers then tried to drag him out of the vehicle, but Daou managed to escape and reached a nearby house where he contacted the Internal Security Forces, the Intelligence Bureau and the Bekaa army intelligence to report the happening.

Relevant authorities arrived at the scene of the attack and launched a probe in the incident, the statement added.

The March 14 General Secretariat strongly deplored the attack against Daou, and called for revealing the circumstances behind it.

Later in the day, Lebanese Forces leader Samir Geagea released a statement condemning the attack that targeted the March 14 General Secretariat member, and urged identifying the attackers and prosecuting them.

"The attack against Daou is unacceptable by all standards, regardless of its motives," Geagea said. "This is a clear attack against a citizen during daylight."

"While the army is fighting on the Lebanese-Syrian border and paying a high price in the blood of soldiers and officers, we are witnessing chaos inside the country," the LF chief stated.

jerry springer and ex-fpm, i will save you the trouble. This is for sure the work of the HA thugs. They are mad because Hariri is back. By the way, the whole incident kind of seems a little fabricated, kind of like the attempt on Geaga.

And if he died it would have been the israeili trying to spread terror in lebanon as for hariri, kassie, hawi, tueni, gemayel...
Chuoachups cityboy, chupachups...

@tricportugal: Are you related to Vasco Da Gama, the Portuguese explorer?

@Vasco: do you have takfiris in Portugal? Did Geagea bring them in?

you jews are so easy to mix up.

As for the jews part u must be a secular kawmi...
Beavo...
Now go ahead have some chupachups...

It did not take them long to make it happen. Who knows what they are planning..... It could also be a robbery or kidnapping gone bad.

if you look at m8 media, you will notice how upset they are of Hariri's return.
so, is it a message? probably.
these terrorists do not seem to want to put an end to their terror.

@flamethrower: I thought your idea to use/steal my idea was a great idea. Respect man;) miss you

your Italian auto-correct is making your sentences "worst and worst". It is not "worth" it...Swtich it off

oh thanks Southern, do you have a copy in Persian?

@PJ the only time this will stop is when someone behead ASSad...

in Baalbeck yes, most probably they will be.

The Chief Inspector General of Farts 14 is so very well trained in guerrilla warfare that is was a piece of cake for him to confuse the ambushers and escape with no harm while at the same time killing 17 of the attackers and badly wounding 63. Who said the Chief Inspector does not dare step inside the danger zone? ah ya nawfal ya kbir