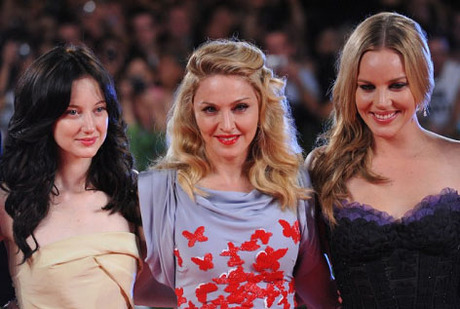 From the red carpet to the big screen, women are dazzling at this year's Venice Film Festival with the key roles going to female stars who amaze with glamour and sheer chutzpah.

Pop diva Madonna crazed the island when she sauntered down the celebrity runway in a striking Vionnet dress with red butterfly motif and long sweeping train -- matched with large red-rimmed sunglasses and a dynamite red lipstick.

The 53-year old Material Girl may have received mixed reviews for her second directorial effort, but she was the life and soul of a Gucci party thrown in her honor, along with her break-dancing boyfriend Brahim Zaibat, 24.

Italian decedence met American pop as Madonna sang "Like a Virgin" and sipped bellinis with guests including the designer Valentino on a terrace looking out onto Venice's Grand Canal until 4:30 in the morning.

The blond star may be planning to spend a lot more time in the floating city, after reports that she has been to look around an enormous palace on the canal, going for 40 million Euros (57 million dollars) -- gondola not included.

As well as partying, the singer also presented the very first Gucci Award for Women in Cinema to American actress Jessica Chastain -- starring in two films screening in Venice this year -- for her performance in "Tree of Life".

Dashing George Clooney is hoping for an award for his fourth film as a director, the political thriller "The Ides of March", which premiered on the opening night to rounds of applause and screams from delirious fans.

Though the Hollywood star was all smiles with the adoring public, he refused to give press interviews during his stay, apparently in the hope of avoiding a grilling on his recent split from Italian girlfriend Elisabetta Canalis.

Instead, he was accompanied on the red carpet by Cindy Crawford -- a former supermodel who wowed paparazzi with a classic red Roberto Cavalli gown -- before slipping away to a private beach party on the Lido island.

While Clooney said he "really enjoyed" directing himself in the film -- quipping "you were very good that day, George!" -- the plot hinges around the actions of a young woman, with a potent performance from Evan Rachel Wood.

The star -- who caused wild print dress by designer Mary Katrantzou caused controversy in some circles -- joked that her performance in David Cronenberg's "A Dangerous Method" was inspired by her own madness.

"Did I enjoy playing a deranged character? It was great fun. I'm obviously crazy anyway, so I drew on that," she said, before being whisked away to the red carpet and a party with co-stars Viggo Mortensen and Michael Fassbender.

U.S. actress Kate Winslet, starring in three films at the festival, said she enjoyed herself in Roman Polanski's comedy "Carnage," where she gets drunk and projectile vomits -- though the vomit, she said, was mainly squashed banana.

After describing with relish her techniques to the press, Winslet swanned down the catwalk in a Stella McCartney dress and delighted the crowds of fans by whipping out her mobile phone to take photos of them.

But it was actress Gwyneth Paltrow who seemed to have had the most fun, as a character in Steven Soderbergh's "Contagion" who gets horrifically killed off by a lethal virus and then has her scalp peeled away and her brain dissected.

"I liked having a seizure, it was exciting, great fun," she said -- though she dismissed the idea that the grizzly demise, including frothing at the mouth, had anything to do with her married character's liaison with another man.

"I think that if death by virus was a punishment for extra-marital affairs there may be only about three dudes left in this room right now," she told a packed press conference in Venice.

"Maybe less, because we're in Italy," she added with a grin.