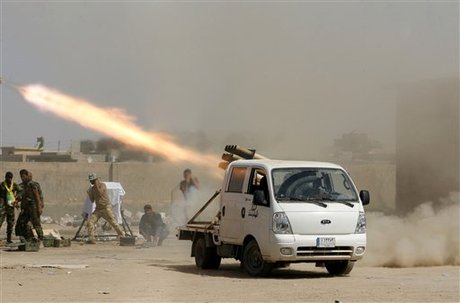 France carried out its first air strike against the Islamic State group in Iraq Friday, boosting U.S.-led efforts to unite the world against the growing threat posed by the jihadists.

More than a decade after Paris famously refused to back the invasion of Iraq, France became the first nation to join the U.S. campaign of air strikes in the war-torn country.

"This morning at 9:40, our Rafale planes carried out a first strike against a logistics depot of the terrorist organization (IS)," President Francois Hollande said.

His office said the target was in northeastern Iraq, without specifying exactly where, only adding: "The objective was hit and completely destroyed."

Kurdish military spokesman Halgord Hekmat identified the location as Tal Mus, between the city of Mosul and Zumar.

"We are very happy that France started its raids," he told AFP.

France, as well as Britain, had already sent aircraft into Iraq's skies for surveillance missions but Friday's strike was its first against the jihadists.

U.S. aircraft have carried out more than 170 strikes since August 8 but President Barack Obama has been keen to build a broad international coalition.

The bombing campaign was launched to protect Iraqi Kurdistan from advancing jihadists and attempt to help the autonomous region's troops retake the ground they lost.

Jihadists who had already controlled large swathes of land in neighboring Syria led a militant offensive that took the city of Mosul, Iraq's second largest, on June 10 and then swept through much of the Sunni heartland.

In a second push in August, they dealt Iraq's Kurdish peshmerga forces a string of military defeats and attacked various minority groups, demolished heritage sites and displaced hundreds of thousands of people.

Footage of the beheading of two U.S. journalists and a British aid worker in Syria sparked international outrage and spurred calls for tougher action against what is widely regarded as the most violent and powerful organization in modern jihad.

Despite broad domestic support for a tougher stance, Obama has vowed not to send "boots on the ground", fearful of dragging U.S. forces back into the Iraqi quagmire only three years after pulling them out.

The U.S. leader has instead pledged to support Kurdish and Iraqi federal forces by offering air support and arms, as well as targeting intelligence and training.

On Thursday Congress backed his plan to arm rebels to take on IS in conjunction with air strikes Obama has pledged to carry out inside Syria.

"These terrorists thought they could frighten us, or intimidate us, or cause us to shrink from the world," he said, after a rare moment of bipartisanship in the House.

"But today they're learning the same hard lesson of petty tyrants and terrorists who have gone before."

Hitting back in the propaganda war, the jihadists posted their latest video of a Western hostage, British journalist John Cantlie, in an orange jumpsuit.

In the footage, Cantlie promises to reveal in a series of programs the "truth" about the jihadist group and appears to be under no immediate threat of being executed.

Some analysts argued the tone of the video revealed IS was afraid of Western air strikes and was trying to convey a less barbaric image of an organization not incapable of reasonable behavior.

As security forces and militia, backed by expanding air strikes, battled to regain ground from IS and allied groups, Iraq was rocked by a series of bombings.

In a Shiite-dominated areas of northern Baghdad, militants blew up two car bombs and lobbed mortar rounds late Thursday, killing at least 28 people in what some said was an attempt to target an army intelligence base where senior IS members are held.

Three bombings in and near the capital on Friday killed at least 14 people, while a fourth in the northern city of Kirkuk killed eight more, officials said.

In Syria, IS fighters were closing in on the country's third-largest Kurdish town of Ain al-Arab, or Kobane, on the Turkish border, cutting off its Kurdish defenders, a monitor said.

"IS fighters have seized at least 21 villages around Kobane," said Rami Abdel Rahman of the Syrian Observatory for Human Rights. "The IS is using heavy weaponry, its artillery and tanks."

The town is one of three Kurdish majority areas where Kurdish nationalists have proclaimed self-rule and its capture would give the jihadists control of a long stretch of the Turkish border.

Syria's exiled opposition National Coalition warned of "the danger of a massacre" in the area, where Kurdish militia have doggedly resisted the jihadists.

Washington estimates IS has 20,000 to 31,500 fighters and there are concerns that returning jihadists could carry out attacks in Western countries.

According to the latest official statistics, the largest contingent of Western jihadists comes from France.

Plus Australia has already sent 8 super hornets and a refuelling tanker plane along with 100 commandos and SAS. the only country not to get involved or join the allainace against ISIS is Turkey. Turkey is becoming the new state sponsor of terrorist. At least KSA pretends to play both sides.

your analysis is always spot on

All GCC and Egypt have publicly "joined" the alliance but only one undisclosed country has agreed to bomb ISIS. UAE is the base for Australian RAAF and Army. Who is the arab country that agreed to bomb ISIS and why not declare publicly? My guess is Oman or UAE.

Syria and iran were not invited to paris, all though obviously they are already in the fight... That leaves only Turkey as the only neighbouring nation in the Middle East that is refusing to join the alliance against ISIS. Why?

tex... the secular turkish army is either siding with erdagon's islamist government out of fear of the kurdish being supplied arms... or they are plotting a coup because they blame all this on Erdagon's policy of supporting the isis and islamist opposition to Assad. Which way they go? After Erdagon appeared to preempt at coup a few years ago, do they still have the ability?

The biggest joke is support to the "moderate" syrian opposition! Who are they? The FSA is nothing... most opposition power is with the Islamic Coalition aka ISlamist extremists that are allied with Al Qaida's Al Nusra. Al nusra is now openly siding with and allied with ISIS after a few earlier skirmishes. This is the biggest hole in the US policy. Old mate McCain even meet with ISIS and al Nusra members when he illegally travelled to syria back in 2011! Afghanistan 2.0

Not to mention the second-in-command of ISIS is a Chechen.

defeating ISIL is easy, just have Bashar Assad promise to stop releasing them from jail.

what is your problem with M14 so you are constantly attacking it?

U like Aoun- I understand. You don't dislike HA, fine. But what is your beef against M14? You dont like freedom and sovereignty for Lebanon?

why doesnt M14 stand for freedom and sovereignty? give me your reasons.

Leb_first don't get into this argument with him. He's just gonna talk about Geagea murdering soldiers and bombing churches and prime ministers, and how he dumped toxic waste in Mount Lebanon (I've looked it up on the internet and found nothing, March 14 must have censored it), what else...oh March 14 is funding Nusra and Daesh with "milk and blankets" (btw Okab Saqr is Shi3a, isn't that funny?)

Those are all the reasons I can think of.

nickjames. FT. Let us clarify
Geagea did indeed put toxic waste in ouyoun el simane and in chnan3ir.
He did not bomb churches.
He did kill the army in 91. But Aoun also bombarded. so they are both wrong.

KSA is not a beacon of democracy. True. But their interference in lebanon is beneficial. When HA did its adventure in 2006, KSA gave 1 billion dollars to stabilize the lira. Dont u appreciate that?
what did iran do? give 1billion dollars to one armed party?
Will that make christians stronger?

you think that the obstructionism of Aoun will get rights to the christians?
you are wrong.

I want to give back some rights to the christians more than you.

The only way to do that is to play by the rules of Taef, get stronger economically and do the economic fight. We dont have other leverages. And HA's weapons are not a leverage. They are only here as a card for Iran;s nuclear ambitions.

Okay so Geagea dumped toxic waste. And what about all the other waste during the 90s? Trash was being dumped on the coast, and this was after Ouwet was outlawed. And what about today's trash problems? What about trash piling up on the streets of Beirut? Was Geagea responsible for that as well? What about the open sewer coming out of the wall, onto the public beach in Ramlet el-Bayda? What about all the sewage being dumped into the sea up and down the entire coast? People are swimming in sewage...

Guys don't take Flamer seriously. According to him Hezbollah was pro-Syria from day one and that Ouwet attacked LAF when it was Aoun who went after them first. Also according to Flamer, as long ad Assad is excluded from the anti-Daesh coalition, these bombings are staged.

Just a smelly, filthy, stinky flamer. You forgot that Hezbollah sent us bombs (Hariri, Tueni, Kassir, Chidiac, Ghanem, Eid, Hassan, Shatah) not to mention Pierre Amine Gemayel, a minister in the cabinet, was shot to death. No wonder why Aoun said he can ensure Hariri's security if he was elected president. Aoun has intelligence regarding all these assassinations i.e he knows who the perpetrators are, thus he can stop them from killing Hariri...

So if he can stop these people from killing Hariri, isn't he an accomplice to all the assassinations? Why isn't he being arrested?