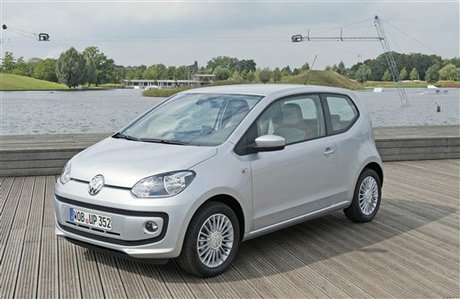 The Volkswagen Up subcompact, Mercedes-Benz's streamlined B-Class hatchback and BMW's electric-powered i3, aimed at crowded cities with its zero-emission motor and lightweight, carbon-fiber reinforced body, are all major bets on what will appeal to buyers — and help earnings through an uncertain year ahead in which global demand may slow.

The mood ahead of this year's show is strangely mixed, upbeat thanks to recent strong profits but clouded by the European government debt crisis, which has depressed consumer optimism and growth forecasts for the year ahead.

But this year's 64th International Motor Show will nevertheless be in sharp contrast to the last show in 2009, when the recession cast a pall. Organizers say 1,007 exhibitors have signed up, compared with 781 last time, and the confidence of the home carmakers is such that VW luxury brand Audi is splashing out for its own test track.

The show opens to journalists on Tuesday and Wednesday at the Frankfurt Messe exhibition center. Chancellor Angela Merkel will open it to the general public on Thursday, after which it will run through Sept. 25.

VW, Daimler, BMW and luxury carmaker Porsche AG all turned in strong earnings so far this year, marked by fat profit margins on strong sales of high-margin luxury vehicles and SUVs in emerging markets such as China, Brazil and Russia. But growth in emerging markets is expected to wane, and the U.S. recovery that fed export earnings is also now in doubt.

Moody's analysts lowered their outlook for automakers to stable from positive. They think governments in emerging markets may have to take steps to curb overheated growth and ward off inflation, while rising prices of raw materials will shave profit margins. They estimate U.S. demand will grow 8.1 percent instead of the 12 percent in a previous forecast while Western Europe is seen growing a meager 0.3 percent.

New small car offerings face a highly competitive European market, where there are lots of difference makes and low prices and profit margins. But subcompact and compact cars are increasingly popular, with 38 percent of the market up 5 percentage points from 10 years ago.

They are also in demand among the emerging middle class in developing countries who don't yet have the money for high-margin luxury cars.

When it goes on sale later this year, Volkswagen's tiny, gas-efficient Up will play an important role in the company's bid to overtake Toyota as the No. 1 carmaker by volume by 2018. It offers maximum interior room on a minimum carbon footprint and technology usually found on bigger cars such as a braking sensor to help prevent low-speed collisions.

VW is trying to position the Up as much more than a bare-bones, low-cost vehicle by equipping it with technology and safety features more associated with larger cars, such as City Emergency Braking, in which sensors detect imminent collisions at low speeds and automatically apply brakes.

At 3.54 meters, the Up is about the same size as the Fiat Cinquecento, but bigger than other competitors such as Toyota's 2.98-meter iQ and Daimler's 2.69-meter Smart fortwo. Short front- and rear-wheel overhangs give it a long wheelbase for its small size and help maximize room inside, and the pronounced "smile" on the front grille adds a whimsical touch.

New three-cylinder, 1-liter gasoline engines give what the company says will be mileage of 4.3 liters per 100 kilometers, or 55 miles per gallon, for the bigger, 75-horsepower version. An electric model is planned.

Analysts at IHS Global Insight think VW could sell 300,000 VW-badged Ups, with more under the company's SEAT and Skoda brands. The less successful Brazilian-made Fox, by contrast, peaked at 200,000 in 2007.

Daimler AG's Mercedes has given its B-Class hatchback a lower, sleeker roof line, resulting in less aerodynamic drag for a family-oriented car. It's also packed with technology such as collision prevention assist, which can apply brake pressure when a crash is imminent, and a seven-speed dual-clutch manual transmission.

The model is key partly because it's a big seller in China, the source of much of Daimler's profits. B-Class sales rose 140 percent there last year.

BMW AG's electric i3 compact saves weight by using carbon fiber-reinforced plastic, boosting not only range but performance; it goes from 0-100 kph, or 0-62 mph, in under eight seconds, driven by a 167-horsepower electric motor.

Carbon fiber is strong and light, but so expensive it has so far been confined to high-end sportscars. Its use to reinforce plastic is a key technological advance toward making electric cars more practical, making room for heavy batteries and extending the car's range. BMW says it will also offer a version with an accompanying gasoline engine that could recharge the battery, extending the car's driving range.

Although the i3 and its companion sportscar the i8 are technically concept cars, or vehicles built just for shows, the company has said they are going on sale in 2013.

— Porsche's new 911 Carrera sports car keeps the classic silhouette — sloping roofline and long, low hood with prominent headlights — that previous versions have had since the brand-defining model was introduced in 1963. The new one is lighter, has slightly more horsepower — with 400- and 350hp engine variants — and a wider front track and better aerodynamics the company says will make all that engine power easier to handle in turns.

— Fiat, which controls a majority of Chrysler LLC, will launch the third generation of its hot-selling Panda city car. The new Panda will be slightly longer, with a more rounded shape than its predecessors, which have sold 6.5 million cars since the model launched in 1980.

— Toyota will introduce a plug-in version of its Prius hybrid, and round out its model range with the 7-seater Prius+. Toyota has sold 2.3 million Priuses to date.