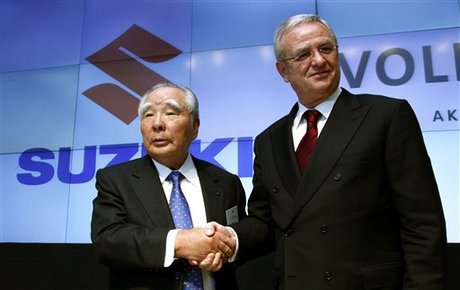 Suzuki Motor Corp. said Monday it will abort its alliance with Volkswagen AG, ending a nearly two-year marriage that never worked and eventually escalated into a public feud.

Suzuki's board of directors decided to dissolve its partnership and cross-shareholding relationship with the German automaker because of concerns that it would lose autonomy, it said in a statement. Volkswagen owns a nearly 20 percent stake in Suzuki, while Suzuki holds about 1.5 percent of Volkswagen.

Suzuki said it will ask Volkswagen to unload its Suzuki shares, which it will buy back with its own financing, and that it would do the same with its Volkswagen shares if the two reach agreement.

Osamu Suzuki, Suzuki's chairman, said the deal, signed in December 2009, had been aimed at accelerating Suzuki's development of ecological vehicles, such as hybrids, electric cars and fuel cells.

But no such project was in the works nearly two years later, and the deal was turning out only negative for Suzuki, taking up time and limiting its operations, he said.

"It is like being married and getting a divorce. Instead of criticizing each other, it is better to go through it with a smile," he said at a hastily called news conference at a Tokyo hall.

He shrugged off questions that the talks to end the partnership may not go smoothly, and said he was confident Volkswagen would also be eager to do the same.

The automakers announced a promising partnership in 2009, establishing one of the world's biggest auto alliances. They said they would work together on product development, production and sales, with a focus on hybrid and electric cars.

Suzuki, which specializes in tiny cars called "kei" or minicars in Japan and other parts of Asia, was widely viewed as needing the prowess of a bigger Volkswagen to ride out the intensifying global competition as the industry moves increasingly to green cars.

But speculation had been growing that the tie-up with Volkswagen wasn't going well because Suzuki began complaining in public.

The partnership with Volkswagen came after Suzuki lost its alliance with General Motors Co., which began in 1981. GM sold a 17 percent stake in Suzuki in 2006, and its remaining 3 percent stake in 2009.

And so Suzuki had hoped to gain access to new technology to stay competitive through forging a new partnership with Volkswagen. For Volkswagen, the alliance represented an opportunity to boost its footprint in emerging markets.

Suzuki holds nearly half the market share in India, while Volkswagen is strong in China, as well as South America and Europe.

But the two companies could not agree on projects or how the partnership would function on the ground.

Their relationship took a bad turn in March, when Volkswagen in its annual report described Suzuki as a "company over which Volkswagen AG has significant influence on financial and operating policy decisions."

Suzuki cited the comment in Monday's statement. It expressed fears of a "negative impact on Suzuki's autonomous decision-making in its operating policy."

It also said it could never gained the sort of access it wanted to Volkswagen's technology.

The frustration appears to be mutual.

Last week, Volkswagen accused Suzuki of violating the terms of its partnership by deciding to buy diesel engines from rival Fiat SpA. It gave Suzuki several weeks to address the issue.

Suzuki declined to say if any other partnerships were in the works.

"Even if we put everything into writing, if there is no heart-to-heart connection, then it doesn't work," Suzuki said, adding he had learned a lot by working with Volkswagen.