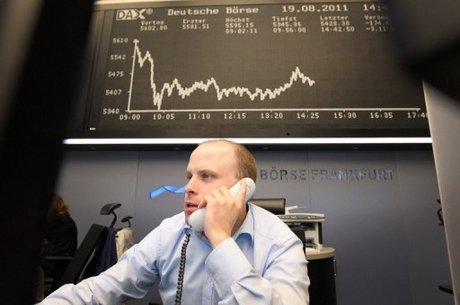 Global stocks plunged and the euro slumped to a 10-year low against the yen on Monday as talk of a possible Greek default compounded worries that the world is set for another recession, analysts said.

European shares tumbled after Tokyo struck its lowest close in 29 months, as the G7 group of rich nations admitted that current economic problems were so complex that a unified response was impossible.

The OECD, only days after warning of potential pockets of recession, said that its composite index of leading indicators signaled a slowdown in most of its 34 member countries.

Banking shares dived on Monday on concern that Moody's credit rating agency might downgrade their ratings because of the amount of Greek debt bonds they hold.

"The intensifying sell-off in both the euro and risk assets in general reflects heightened investor fear that Greece is on the verge of defaulting which could plunge the weak global economy back into another Lehman-esque recession," said Lee Hardman, currency economist at The Bank of Tokyo-Mitsubishi UFJ.

"Hopes for coordinated action from the G7 finance ministers over the weekend to restore confidence to financial system predictably fell short of expectations."

The flight to safety drove down yield on 10-year bonds issued by Germany and the United States to historic low levels.

At ING debt strategy, analyst Alessandro Giansanti also noted the shock to sentiment of the announcement on Friday that the chief economist at the European Central Bank, Juergen Stark would resign.

Giansanti, noting that this was rumored to be because of "personal disappointment with the ECB purchasing of Italian and Spanish bonds," said it had sparked heavy selling of bonds issued by Eurozone countries in trouble.

Bank watchers suggested his exit showed that the ECB was deeply split over its approach to handling the sovereign debt crisis.

Greece -- which earlier this year was given the green light for a second bailout -- announced on Sunday two billion euros ($2.7 billion) in budget cuts demanded by the EU and the IMF for its rescue package to avoid a default.

EU Economy Commissioner Olli Rehn welcomed the move and said a team would head to Athens in the next few days to discuss a new tranche of Greece's first rescue package agreed in 2010.

However, European finance ministers are split over how to deal with obstacles holding up the second 160-billion-euro bailout for Greece, agreed in principle in July.

And Germany's Economy Minister Philipp Roesler pointedly said, in a column for publication on Monday, that Europe could no longer rule out an "orderly default" for Greece

Public debt across the 17-nation Eurozone will rise even as growth returns, hitting a peak of 88.7 percent of output in 2012, the EU said on Monday.

Greece, Ireland and Portugal will have to wait much longer to reduce their debts, according to the annual European Commission report on public finances.

"It's very clear to us that this situation in Europe is not going to end well and the now plummeting euro is trying to tell you that some sort of Greek default and subsequent European bank recapitalization program is imminent," said Bell Potter managing director Charlie Aitken in Sydney.

On Saturday, Der Spiegel magazine reported that the German government was preparing two contingency plans in the event of a Greek default.

The Tokyo stock market tumbled 2.31 percent on Monday to close at its lowest level for almost 2.5 years, with exporters again feeling the most pain as the euro sank against the yen.

After the closing bell Toyota's credit rating was cut by Fitch, which blamed the strong yen.