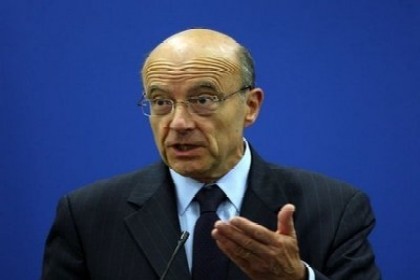 The visiting Juppe met his Chinese counterpart Yang Jiechi and discussed the need for a resolution condemning the military crackdown on protesters, he told journalists.

But asked if he had the impression that China's position had changed, Juppe said: "Not really."

For weeks France and Britain have tried to get a U.N. resolution, but Moscow and Beijing, both veto-wielding members, and numerous other members of the Security Council have refused to come on board.

"I said that our relations are excellent, but this does not mean that we are in agreement on everything," Juppe said.

The U.S. said Monday it wanted "stronger" United Nations action on Syria and will push the Security Council for a resolution that has sanctions with "teeth."

Russia has opposed attempts by Western governments to push through a resolution directly targeting Syrian President Bashar Assad, whose regime has waged a deadly six-month crackdown on protesters.

Juppe also said there was only a small chance of avoiding a confrontation over Palestinian statehood at this week's meeting of the U.N. General Assembly in New York.

The bid is opposed by Israel, which calls it a unilateral move that undermines peace efforts, as well as Washington.

"There is a small chance that there will be an effort at reaching a resolution that is acceptable to a large number of nations," Juppe said when asked about the Palestine question.

China has voiced support for Palestine statehood and its membership to the United Nations.

Like dogs, the Brits were turned back by Russia and the French by China. Like dogs, they will keep barking as the Syrian caravan moves towards a brighter and more pluralist future and becomes stronger than ever despite the isolation from the "international community" aka the countries who have raped and occupied (and still occupy) the Middle East and North Africa for centuries.

Oh really? And do these farts still expect the world to trust them after their hypocrisy has been exposed and the illegal wars that they have waged? They must be real farts to convince themselves of that.