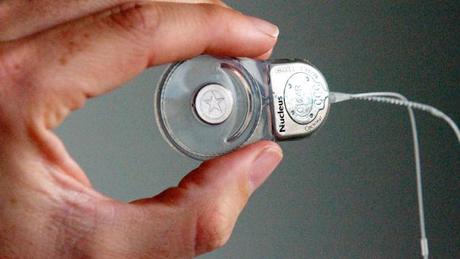 Bionic ear maker Cochlear has been forced to begin a global recall of the world's thinnest hearing implants after some stopped working.

The Sydney-based company, which dominates the world's bionic ear market, said Monday it was mystified as to why some of its award-winning Nucleus CI500 devices were suddenly shutting down.

The company has begun recalling its entire Nucleus CI500 range, which makes up the bulk of its sales, from shelves after a rise in the number of faults with the CI512 model.

While Cochlear believes the faults are unlikely to cause any health problems for people with defective implants, they are offering replacement models for re-implantation.

The news sent Cochlear's shares into a tailspin, with the stock dropping more than 25 percent at one stage amid worries about the financial impact and potential damage to the company's reputation the recall could cause.

Cochlear chief executive Chris Roberts said he was unable to say how many of the "very reliable" titanium-based devices were faulty.

While less than 1 percent of the Nucleus CI500 devices had failed since they hit the market in 2009, there had been a steady rise in faults being reported in recent weeks.

"We don't know what the cause is," Roberts told analysts on a conference call.

"That's exactly what we need to evaluate. We want to avoid saying it's 'a' or 'b' or 'c' when we have to up every stone and examine every possibility," he added.

People fitted with CI500 units but who have not experienced any problems are being advised to continue using the devices.

The voluntary recall of the Nucleus CI500 range includes the CI512 model as well as the CI513, CI551 double array implant and ABI 541 auditory brainstem implant.

It does not affect its earlier Nucleus Freedom range or its Nucleus 5 external hearing devices.

Production of the CI500 devices has stopped and patients needing bionic ear implants are being offered the Nucleus Freedom model, which has been on the market for seven years.

Roberts said Cochlear was better off halting manufacture until the cause of the faults was uncovered.

He was unable to say how long it would take before the devices were back on sale but said if any changes had to be made, the company would need to get regulatory approval from the countries where the units are sold.

Cochlear was also unable to say what the cost of the product recall would be.

Cochlear sold more than 17,000 of its Nucleus 5 range of devices in the 2010/11 financial year, representing 70 percent of its total bionic ear sales in 100 different countries.

The Nucleus 5 range includes the thinnest hearing implants on the market at just 3.9 millimeters (0.15 of an inch) thick.

Cochlear has promoted them as "a new design that is built to last a lifetime."