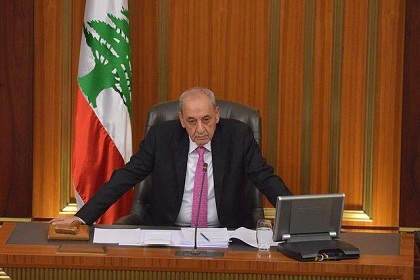 Speaker Nabih Berri has expressed severe frustration at criticism directed against the army, rejecting verbal assaults on the military, which is caught in a battle with jihadists on the border with Syria.

“The army's soldiers and officers are among the best and we are proud of them,” Berri was quoted by An Nahar daily as saying on Tuesday.

“We appreciate them given the role they are playing and the sacrifices they are making,” he said.

“Any harm done to the military institution is rejected,” Berri added.

The speaker lauded the army for confronting terrorists and stopping them from occupying the northeastern border town of Arsal despite its limited capabilities.

The jihadists from al-Nusra Front and the Islamic State group engaged in bloody gunbattles with the army in Arsal last month and took with them hostages from the military and police.

They later executed three of the captives.

They have exclusive rights to loving the army, loving Lebanon, loving minorities. If you love the army so much hand over your weapons to the army, respect it, and stop humiliating the army by have a parallel military force armed to the teeth that does not take orders from the army you claim to love. The army must deal fairly with all its citizens in order to earn their respect. As much as I reject extremists raise the banners of ISIS I also reject my army facilitating HA war in Syria and allowing it to openly transfer men and weapons freely across the border.

Booking Hotels in Lebanon immediately without a credit card, call us now 0096170295326 or visit us at www.booklebanonhotels.com

Meedoo
Yea thousands and thousands of thousands of tourists are waiting in line to book hotel reservations. there is no vacancy in Lebanon hotels
Best of luck

terrorist
desperate is an understatement

FT it is enough to know that HA killed Harriri and Aoun killed the martyrs that followed. Think about it.

Ahh FT the army has now become your shield against the atrocities committed by HA and the betrayals of Aoun to his own sect. Yes we hate our army and only your pathetic General and his allies love our army. You pathetic banana, when are you going to wake up.