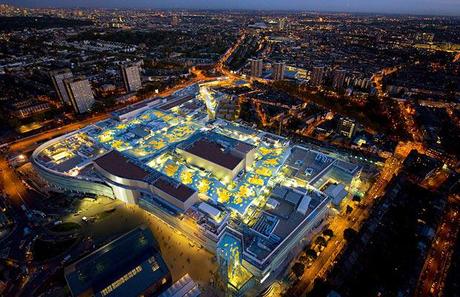 Europe's biggest urban shopping centre opened on Tuesday in a deprived area of east London where it will act as the gateway to the 2012 Olympics.

Westfield Stratford City, which has risen from derelict wasteland in one of the poorest areas in Britain, houses more than 300 shops, 70 restaurants, a 14-screen cinema, three hotels and Britain's largest casino.

Hundreds of people queued outside the £1.45 billion ($2.3 billion, 1.7 billion euro) mall before the doors even opened on and 100,000 people were expected to turn up on the first day.

The Australian owners of the centre are confident they can defy the retail gloom as the British economy stutters.

Westfield's sister site in Shepherd's Bush, west London -- previously the biggest mall in Europe -- opened in the depths of a recession in 2009 yet attracted 23 million visitors in its first year.

The giant Stratford site is a cornerstone of the Olympic Park and spectators arriving for next year's Games will have to walk through the shopping centre to reach the sports venues.

A high-speed train will bring 25,000 Olympics spectators an hour to Stratford International station where they will be greeted by a row of shops and restaurants.

Crucially for an area with unemployment levels far above the national average, the centre has created 10,000 new jobs.

Local politicians believe it is another part in the jigsaw of regeneration which they hope will create a thriving community once the Olympic flame goes out.

"Westfield represents more than just bricks, mortar and fabulous shops and restaurants, it has been instrumental in helping us to transform the lives of our residents by providing them with employment and jobs that they can turn into fulfilling and rewarding careers," said Robin Wales, the mayor of the borough of Newham.

But the site's proximity to the Olympic park has required additional security precautions.

The London Organizing Committee of the Olympic Games (LOCOG) said it will be operating checks on vehicles entering the public car park at the shopping centre until the Games end in September 2012.

Paul Deighton, LOCOG chief executive, said: "With Westfield so close to the Olympic Park and with vehicle access to it directly accessed from the park, it is an obvious and important part of our security plans.

"We will make the checks as quick and unobtrusive as possible -- we are confident that shoppers will recognize the need for us to be vigilant and carry out these checks."