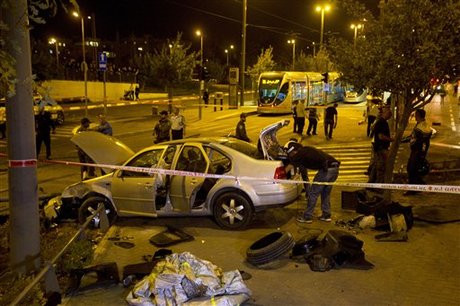 Israel on Thursday pledged a tough response to any further attacks in Jerusalem as police flooded flashpoint Arab neighborhoods a day after a Palestinian car attack killed a baby.

It was the second deadly incident involving a Palestinian driving a vehicle in three months and prompted a sharp warning from Prime Minister Benjamin Netanyahu.

"Jerusalem is united and was, and always will be, the eternal capital of Israel. Any attempt to harm its residents will be met with the harshest response," he said.

Wednesday's attack saw a Palestinian ramming his car at high speed into a crowd of Israeli pedestrians, killing a baby and injuring another six people in what police dubbed "a hit-and-run terror attack".

The driver, 21-year-old Abdelrahman Shaludi from Silwan in east Jerusalem, was shot while trying to flee the car on foot and later died of his injuries.

Israel said Shaludi was a Hamas activist, but although family members confirmed he was the nephew of a top-Hamas bomb-maker who was killed 1998, it was not clear whether he himself belonged to the Islamist movement.

The incident triggered clashes between police and stone-throwing Palestinians across east Jerusalem which lasted into the early hours. Police confirmed arrests but would not give a number.

By Thursday morning, following an order from Netanyahu, police surged into flashpoint neighborhoods in a bid to stamp out a wave of persistent unrest that began nearly four months ago.

Netanyahu also lashed out at Palestinian President Mahmud Abbas, accusing him of encouraging attacks in the city.

"Jerusalem is coming under attack by terror... and this attack is supported by the chairman of the Palestinian Authority," he said in his second attack on Abbas since the fatal incident.

On Wednesday evening he accused the Palestinian leader of "inciting a terrorist attack in Jerusalem."

"The man, once he looks at the mirror... should know who's responsible for the miserable situation of Palestinians and Israelis, the escalation of violence and so on," he told reporters in Ramallah.

"He plants the seeds of desperation."

Family members said Shaludi had been recently released from prison where he served 14 months for disturbing the peace, a euphemism for participating in unrest.

Palestinian community officials say the wave of unrest gripping the city is fuelled by a sense of hopelessness resulting from Israel's policies in east Jerusalem, which have left many young people with a sense that they have nothing to lose.

Unrest has gripped the eastern part of the city on an almost daily basis for the past four months, and several Israeli commentators said it was being fanned by recent acquisitions of homes in the area by Jewish settlers.

Police warned Thursday they had adopted a "zero tolerance" policy toward any incident of violence in the city, pledging to prosecute offenders to the fullest extent.

Police officials said they had activated "a strategic plan" to end the wave of unrest, which would include aerial observation and the deployment of extra forces on the ground, some of them undercover.

Jerusalem Mayor Nir Barkat said there was no choice but to flood flashpoint neighborhoods with police to return calm.

"The situation in east Jerusalem is intolerable... Today it is clearer than ever that we have to deploy police into neighborhoods where there are disturbances to stabilize them," a statement said.

Washington denounced Wednesday's attack as "despicable" and called for both sides to demonstrate restraint to "avoid escalating tensions", but did not confirm reports that the infant who was killed had U.S. nationality.

The victim, three-month-old Haya Zissel Braun, was buried at a late-night funeral in Jerusalem.

During another incident in August, a Palestinian rammed a bus with an excavator, killing one Israeli and injuring five. Police shot the driver dead.

Much of Palestinian anger over Jewish settlements in east Jerusalem has focused on Silwan -- a densely populated Arab neighborhood on a steep hillside just south of the Old City.

The neighborhood hit the headlines in the past month after settlers acquired another 35 apartments there, triggering outrage from the Palestinians and condemnation from Washington.

Several Israeli commentators said that settlement expansion in Silwan had inflamed anger ignited in early July after the grisly murder of a local teenager by Jewish extremists.

"Since the murder, the area... has been on the brink of anarchy," wrote Alex Fishman in the top-selling Yediot Aharonot newspaper.

"The Israeli establishment did its part in fanning the flames of the growing anarchy -- Jews going to live in Silwan (and) forbidding Muslims from entering the Temple Mount during Jewish holidays," he wrote of the Al-Aqsa mosque compound, a site which is holy to both faiths.

"If they continue to do this, it is reasonable to assume that the Palestinian reaction will escalate."