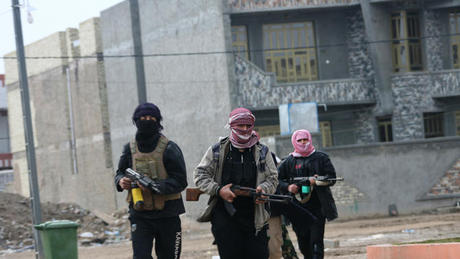 The Islamic State group launched a major attack on the Iraqi city of Ramadi Friday, attempting to seize one of the last urban pockets under government control in troubled Anbar province.

Parts of Ramadi, the provincial capital, and all of Fallujah to its east, fell to anti-government forces in January.

In June, IS-led militants began overrunning more of Anbar and have gained further ground in recent weeks, raising fears that the province, which stretches from the borders with Syria, Jordan and Saudi Arabia to the western approach to Baghdad, could fall completely.

"IS launched a surprise attack from four directions -- north, west, east and south of Ramadi," a police first lieutenant in the city told AFP by telephone Friday.

"A series of mortar attacks have targeted areas inside the city, including provincial council buildings and a police post," the officer added.

Police Captain Qusay al-Dulaimi said "the mortar fire has been continuous since midnight."

Unlike in the past, mosque loudspeakers called on people to fight IS rather than resist government forces.

Soldiers, police and tribal fighters were able to retake one area the militants had seized and hold off attacks on others, deputy provincial council chief Faleh al-Essawi and tribal leader Sheikh Rafa Abdulkarim said.

But the sound of gunfire could still be heard in the city early Friday evening, indicating that fighting in the area was not over.

A fresh spate of attacks in recent weeks has seen the jihadists extend their grip over the province, where only a handful of pockets remain under the control of Iraqi security forces backed by Shiite militias and Sunni tribal fighters.

But there is still little threat of a direct assault on Baghdad, as militants would have to gain much more ground for one to be viable.

The killings are just the latest in a long series of atrocities, including hundreds of executions, carried out by IS in Iraq and neighboring Syria.

Iraqi security forces performed poorly when faced with the initial jihadist-led onslaught in June, with several divisions collapsing in the north.

But with support from a U.S.-led campaign of air strikes and foreign military advisers, they have retaken some areas. Even so, three key cities and large chunks of other territory remain in jihadist hands.

The U.S. Central Command announced Wednesday that coalition forces carried out 30 air strikes against IS in Iraq and Syria from Tuesday to Thursday, 23 of them in Iraq.

IS has attracted thousands of foreign fighters from various western nations, raising fears that they may return home to carry out attacks.

A Dutch 19-year-old who converted to Islam, traveled to Syria and married an IS fighter before being rescued by her mother was on Friday ordered to be detained pending possible terrorism charges in the Netherlands.

Turkish Prime Minister Ahmet Davutoglu meanwhile traveled to Iraq's autonomous Kurdish region, whose forces have played a major role in the fight against IS, for talks with its leadership.

That came a day after he was in Baghdad for security talks with Prime Minister Haidar al-Abadi, and offered military assistance.

Since the beginning of the year, violence in Iraq has forced hundreds of thousands of people to flee their homes, and they now face a harsh winter in makeshift shelters or camps.

The United Nations said Friday it had begun airlifting tent insulation kits into Iraq to help some of the around two million displaced people deal with the winter cold.