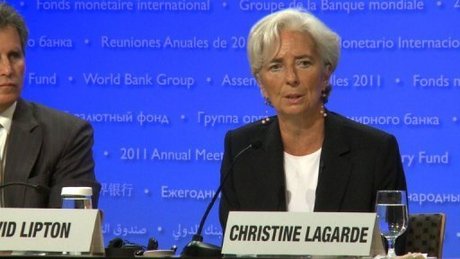 The Group of 20 major economies have vowed to mount a powerful response to the rising challenges facing the world economy as it reels from a debt crisis in the Eurozone.

The pledge, made in an unexpected statement late Thursday, came after world leaders ramped up pressure on Europe to take decisive action to contain its debt crisis as markets spun out of control.

Asian markets fell for a second straight day on Friday but recovered from earlier lows after the G20 announcement, and European stocks edged up in unsteady morning trading, clawing back some dizzying recent losses.

The G20 finance ministers and central bankers pledged in the joint statement to deliver "a strong and coordinated international response to address the renewed challenges facing the global economy."

The G20 officials, grouping advanced and emerging-market economies, said they would work together to support growth and implement "credible fiscal consolidation plans."

"This will require a collective and bold action plan, with everyone doing their part," they said, hours after stocks plunged worldwide.

The officials said the action plan would be prepared for the G20 leaders’ summit on November 3-4 in Cannes, France.

They had not been expected to issue a statement following their working dinner in Washington on the sidelines of the International Monetary Fund and World Bank annual meetings.

At the opening of the meeting, World Bank head Robert Zoellick had called on Europe, Japan, and the United States "to address their big economic problems before they become bigger problems for the rest of the world."

"Not to do so is irresponsible," he added.

Financial and commodity markets on Thursday were hit by a huge sell-off sparked by Europe's public debt problems and perceptions that the U.S. economy is falling back toward recession.

At a post-dinner news conference late Thursday, French Finance Minister Francois Baroin, whose country holds the G20 presidency, said the statement had not been planned and was partly a response to the market turbulence.

In the statement, the G20 pledged to "take all necessary actions" to preserve the stability of banking systems and financial markets "as required."

"We will ensure that banks are adequately capitalized and have sufficient access to funding to deal with current risks and that they fully implement Basel III along the agreed timelines," the statement said.

Central banks will continue to stand ready to provide liquidity to banks as needed, and monetary policies will maintain price stability and continue to support economic recovery, it said.

The move came as tensions worsened in Greece, the epicenter of the Eurozone crisis, where widespread strikes erupted over new budget cuts agreed to under EU and IMF pressure.

Athens hopes to receive more funds from a 110-billion-euro rescue program tied to austerity measures, without which it could default on its debt as early as next month, sending shock waves throughout the Eurozone.

The G20 officials are to hold further meetings on Friday, followed by a news conference.