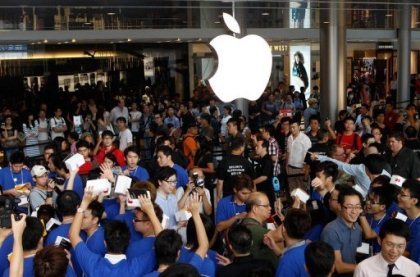 Apple threw open the doors to its first store in Hong Kong Saturday, its latest push to tap the booming China market, as protesters accused the technology giant of supporting sweatshop labor.

The minimalist store spread over two floors in one of Hong Kong's most upmarket shopping malls is Apple's sixth outlet in China, launching just a day after the doors opened on another new branch in Shanghai.

Apple's second quarter revenue in greater China -- which includes Hong Kong and Taiwan -- reached $3.8 billion, a six-fold rise on the same period a year earlier, making the region a key driver of the company's record results.

Die-hard fans in China, which has the world's largest online population with 485 million users, have been known to line up for days to get their hands on the latest Apple products.

A queue of more than a thousand people snaked along an overpass near Hong Kong's Victoria Harbor, with some people waiting since Friday to be among the first inside on Saturday.

Employees handed out free t-shirts, chanted "Apple, Apple" and high-fived shoppers as they made their way up a spiral staircase set against a window showcasing the city's skyline.

"It's a very exciting atmosphere."

Previously, Apple products were available in Hong Kong through registered dealers and online, but the opening Saturday marked the first branded Apple store in the southern Chinese territory.

Some dropped by the mall just to take a picture of the chaotic event, but Trish Peck was among those who waited eagerly to take a peek inside the shopping-mad city's newest retail phenomenon.

"Hong Kong really knows how to tap the consumer slant," she said.

"We haven't quite hit the China consumer level yet. For us, it's about education (for the kids)... but there is a certain cachet with the brand."

About 20 activists from the group Students & Scholars against Corporate Misbehavior protested outside the store, chanting and holdings placards that read "No more iSlave" and "Apple is a sweatshop".

Security staff prevented activists from hanging a protest banner on the overpass where shoppers were queuing, a spokeswoman for the demonstrators told AFP.

The group took aim at the California-based firm over one its key suppliers, Taiwan's Foxconn, which is the world's largest maker of computer components and assembles products for Apple, Sony, and Nokia.

Labor rights activists have heaped criticism on Foxconn after more than a dozen employees died in apparent suicides at its plants last year, which critics blamed on tough working conditions.

An Apple spokeswoman could not be immediately reached for comment.

China's craze for all things Apple has led to widespread cloning of iPhones and iPads, and in July an American blogger uncovered fake Apple stores in the southwestern city of Kunming.

The shop was so convincing even the staff -- who wore Apple's trademark blue T-shirts with name badges around their necks -- thought they worked for the company.

Two other rip-off Apple shops were nearby, one of them sporting a sign reading "Apple Stoer"