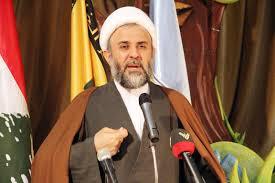 Deputy head of Hizbullah's Executive Council Sheikh Nabil Qaouq stressed that Hizbullah is going ahead with internal talks in Lebanon “out of its keenness on national interests,” reported the National News Agency on Sunday.

He said in reference to the expected dialogue between Hizbullah and the Mustaqbal Movement: “Dialogue will help avert strife.”

“The simple announcement of the Hizbullah-Mustaqbal dialogue paved the way for calm throughout the nation,” he declared.

Qaouq added: “It was a message to internal and foreign powers that Lebanon is recuperating from sectarian tensions that are raging in the region.”

Earlier, an MP from the March 14 alliance expressed pessimism over the possibility of political factions in resolving pending disputes, saying that the Mustaqbal-Hizbullah dialogue will only lead to easing political tensions, reported the Kuwaiti daily al-Anba on Sunday.

The Christian MP, who was not named, told the daily: “The dialogue between the two sides will divert attention from the main political powers' inability to reach consensus over a new parliamentary electoral law.”

“The dialogue will be useful given the local tensions and the unrest in Syria and Iraq. The talks will have very positive repercussions on Lebanon,” he remarked.

He added that the March 8 alliance of Hizbullah would be keen for the “photo opportunity” with the Mustaqbal Movement, while the movement would demand that the dialogue focus on a new electoral law, the election of a president, and the arms of the resistance brigades, which is affiliated with the party.

The differences in view over the expectations of the talks reflects the gap between Hizbullah and Mustaqbal, noted the lawmaker to al-Anba.

He meanwhile reiterated the stances of various officials that an agreement over an electoral law will not be reached any time soon, predicting that the vacuum in the presidency may last until mid 2015.

Ultimately, he said that progress in resolving any of the pending issues hinges on the negotiations between the United States and Iran over Tehran's nuclear program.

A date for the Mustaqbal-Hizbullah dialogue has not been set yet as efforts are still underway to organize the meeting, its agenda, and who will be in attendance.

hahahaha! you keep entertaining us in good times and in bad times. You never quit, you never retreat, you fight, you bob and weave, you are elegant and witty. Somesing anazar flamesrower!

may you RIP dear ...flamethrower--

Hey rookoz, still doing amazing job with our Mujawlaq, just try to get them before all is too late, attack and dont look back.

Women are better than men in finding peaceful solutions. But the bearded back age group will be disturbed by them.

another shallow and idiotic comment from FPM braindead FT...

So are we supposed to call them March 14 or February 14 what are the latest directives from SANA, eh flamethrower?

yes you did empty brain... posting a YouTube link crying about some women stealing sweets...

poor idiot you always will be....

The propagandist posts so much and so many he forgets.

I wasn't answering anything but merely putting a question to the exclusive representative of SANA on Naharnet. Although they both start with an "a" answer and ask are two different words with different meanings. But I can see how someone with our learned friend flamethrower's high level of education and intellect can confuse the two; I mean they both start with an "a", what is that!
Oh and brother flamethrower I suggest you call tricky Portugali he can help you with some sorely needed advanced English leçons particulières, as you see he masters the matière.
BTW I haven't received an answer to my query, are you still waiting for a reply from Damascus?

Hey Tony? Nasrallah, call them as they are March mellow lovers... with extra cheese Pizza.

That's how Russian KGB freed its hostages abducted by Hizbullah in 1986 (Machia's reported this earlier).

"This is the way the Soviets operate. They do things - they don't talk.

"And this is the language the Hezbollah understand.

Exactly what we should do.

A strong Government, strong army,abiding by the constitution, and disarmed militias are the only path to averting strife ...

All this Mustaqbal/Hezbollah dialog is nothing but hogwash. It is a show to delay things in Lebanon. Both of them don't represent the interests of all the Lebanese, so the only way out is for us to have a new president, a new parliament and a new cabinet. delaying tactics will not work, we've seen it before and it never worked and will not work now either. Just a sheer waste of our time that's all. Then what are Messrs. Aoun and Geagea doing but sitting like lame ducks and voiceless bystanders? Isn't that a parody of shame for us?