Nasrallah to Give Speech on Friday 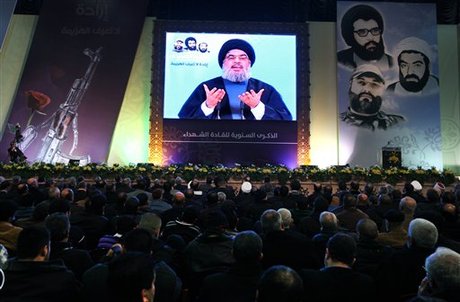 Hizbullah leader Sayyed Hassan Nasrallah is expected to speak on Friday during a ceremony held on the occasion of the Prophet's Birthday.

Nasrallah's speech via video conference is expected to tackle the local and regional developments and mainly the dialogue that is taking place between Hizbullah and al-Mustaqbal representatives.

Friday's ceremony will be held at al-Mahdi high school in Hadath.

Their dialogue however is not expected to focus on Hizbullah's role in the civil war in neighboring Syria.

The Hizbullah secretary-general last made a speech on the occasion of Ashoura on Nov. 4, during which he said takfiris — a term for Islamic extremists — will be defeated everywhere.

"We will have the honor of having been part of their defeat," he said.

Hizbullah has sent its fighters to Syria to help troops loyal to Syrian President Bashar Assad against Sunni rebels seeking to topple him.

you dont have to listen to them westernfakelebanese, and if you're not interested i wonder why even several days before the speech you start slandering with your little friends below... is that your job?

oh _mowaten_ you scary me sometimes!!!! I was thinking the same thing, exactly the same thing. We are so so similar it is not even funny anymore. We are both Shia and extremists; We both pretend to be secular and non-prejudicial; We both are malignant narcissists; We both lie and distort and last but not least; We both are paid to post.
_mowaten_, do you think people might think we are the same poster? I hope not

cityboy (Guest) "We both lie and distort and last but not least; We both are paid to post."

speak for yourself troll. but glad to see you admit being paid.

Ebola is to spread more viruses.

on the occasion of the prophet's birthday, really? this terrorist has no religion, no ethics, and no morals..

Allow me to add that this is pure and utter terrorism as those shootings represents a deliberate and indiscriminate violence against innocent civilians.

what is this criminal sectarian going to say?

Somebody grab a secateur and cut off that index that will be pointing and threatening...

your wet dreams are lamer and lamer every time thepatatiot

mowaten, is that what you call an intelligent attempt at debate?

there is nothing to debate with patatriot, or you for that matter. you trolls are below debating

"there's nothing to debate..." yet he still posts.
how much is hizbollaat paying you per post for your "jihadist" duty...

mohammed you're saying that all posts must be debates? what about your comment? is that what you call an intelligent attempt at debate? lol

Wow was that another 10$ for your jihadist duty? Chuching!

what happened here? you first tried to make a point, but then realized all you're good for is deflection and childish retorts? good that you found your place lol

Well... I know that somebody already cut off a "little" part of you momo... or where you born like this? :)

lol you didnt know what to answer so you reported my comment? how cheap of you, but not surprising, and here goes again:

what "part" are you suggesting? and most importantly, how would you know?

thanks for confirming that you express "guesses" saying "i know". it explains a lot about all the bull you've been peddling around calling them "facts"