Masri 'Suspends' Mediation, Forcing Cancellation of Priest Meeting with IS 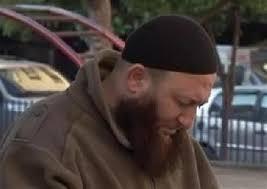 Salafist cleric Sheikh Wissam al-Masri has announced that he will suspend his mediation in the case of the captive Lebanese servicemen until he receives an official paper containing the demands of the Islamic State group, revealing that his decision had prompted the cancellation of a visit by Father Antoine Daou to the kidnappers.

“The government wants demands signed by the IS and I don't blame it. For my part, I have asked the IS for an official paper, and until I obtain a signed document of the demands, I will not interfere in the case,” Masri said in an interview with the Central News Agency.

The cleric had on Tuesday announced that he visited the captors who belong to the IS in the outskirts of the Bekaa border town of Arsal, declaring that the group demanded a “buffer zone” in the border area, a hospital for the treatment of the wounded and the release of women prisoners from Lebanon's jails.

His announcement, however, was swiftly dismissed by Health Minister Wael Abou Faour, who announced the next day that Masri had nothing to do with the ongoing negotiations and that the demands he carried did not bring anything new.

“I was fully coordinating with the office of General Security chief Maj. Gen. Abbas Ibrahim and the government has not given an official authorization to anyone. It did not grant it to the Qatari mediator nor to the Muslim Scholars Committee,” Masri noted.

As for the mediation of Arsal deputy municipal chief Ahmed Fleiti, the cleric wished success for the man's initiative, adding that what matters is the final outcome.

“But as far as I know, there are no contacts or communication between him and the IS and he's maybe in contact with al-Nusra” Front, Masri went on to say.

The Lebanese troops and policemen were taken hostage during deadly clashes in and around Arsal in early August. Four captives have been executed to date and the kidnappers have voiced several demands, including the release of Islamist prisoners held in Lebanon.

Asked about the “positive” indications mentioned by Interior Minister Nouhad al-Mashnouq, Masri noted that the negotiations have warmed up thanks to his latest efforts.

“I managed to obtain a pledge from al-Nusra on halting executions and I also visited the IS-held captives and the group promised me to stop the killings and gave me a list of their demands … but from now on, I will only act when I receive official statements from the two groups,” the cleric added.

Separately, Masri declared that Father Antoine Daou had planned to visit the IS in Arsal's outskirts to discuss the case of the abducted servicemen.

“He coordinated the visit with me and I paved the way for him, and the IS was preparing a special reception for him,” Masri said.

“But the meeting was called off because I decided to suspend my mediation and stop my visits to the outskirts,” the cleric clarified, adding that the Lebanese security authorities “also voiced concern over Father Daou's health condition seeing as he is at an advanced age.”

The botched meeting would have “highlighted that the case of the servicemen is not only a Sunni case, but rather one that is of concern to all the Lebanese,” Masri said.

IS and nusra are playing with the country's nerves. they dont want to negotiate, they just want to see how far they can take this. about the army was given carte blanche to deal with that situation. enough of dodgy politicians and clerics fooling around and achieving nothing.

about *Time the army was given carte blanche to deal with that situation.

You beat me to it mowaten. I was thinking the same thing, exactly the same! I think the army should be given a free hand to clean up the mess that hizbullah created.
We are so so similar: we are both malignent narcissists, both shia extremists who pretend to be moderates, both have an inferiority complex, both pretend to be secular, and both have multiple accounts. I just hope readers don't think we are the same poster.

when the Lebanon army join forces with Nusra to fight the HA terrorism in the region!!!???

lol cityboy, you used to say you were getting paid to post (like here http://www.naharnet.com/stories/en/161662-nasrallah-to-give-speech-on-friday) but i see you changed your little couplet to omit that little slip of yours.

It may be the antidepressants talking, but I’m feeling somewhat optimistic about flamethrower in 2015.

lol@iceman:))) why ask... probably his daughter.

Khalifa is actually Christian, she even has an Ouwwet tattoo on her wrist... what a wonderful girl

no nickjames she is not a Christian. There are photos of her wearing the hijab on her twitter account.

No there aren't, I saw her Twitter. She wore the hijab in one of her videos, but she's Christian. She was even asked why she has a tattoo of the Ouwwet cross.

oh damn ex-fpm, you seem devastated by that news.

roukuz.3oshak, the exemplification of m14 mentality and class

The khalifa family is a shiite family from saksakiyeh in south Lebanon.. This lost soul immigrated to the USA in 2000 and converted to Christianity and changed her name from zeinab to maya in order to fit in with her new environment. Relatives and neighbors in her town remember her as a young child who roamed the streets at night in search of men. Her father is a supporter of the iranian sectarian terrorist militia and her brother was martyred in Syria.

i agree with you nickjames.

and joetakfiri you really never get tired of making a fool out of yourself do you?

not sure i'd call that "funny" with all the sectarian insinuations and incitement, i'd personally call that blatant and clumsy attempts at disinformation.
but as long as we agree his stories are just stories, it's fine with me ;)