Mansour and Mawlawi among 28 Charged in Tripoli Bombing 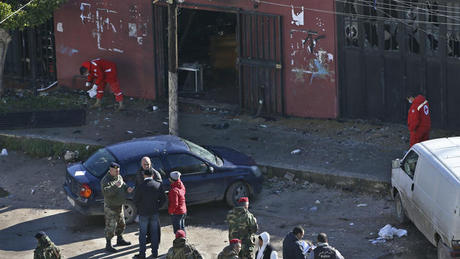 The military prosecutor charged on Tuesday 28 people, four of them detainees, in the double suicide bombing that rocked the Jabal Mohsen district of the northern city of Tripoli earlier this month.

The state-run National News Agency said the charges issued by Judge Saqr Saqr include membership to an armed terrorist organization for the purpose of carrying out terrorist activities.

Among the suspects who are on the run are top wanted terrorists Osama Mansour and Shadi al-Mawlawi.

Both are wanted for leading armed groups that engaged in deadly gunbattles with the Lebanese army in Tripoli and its surrounding areas last October.

Mansour and al-Mawlawi were also charged with recruiting people for the purpose of carrying out terrorist attacks, assaulting the army and planting bombs, said NNA.

Nine people were killed and at least 37 injured on Jan. 10 when two suicide bombers attacked a packed cafe in Jabal Mohsen.

Syria's al-Qaida-linked al-Nusra Front claimed responsibility on Twitter for the blast. But Interior Minister Nouhad al-Mashnouq and Justice Minister Ashraf Rifi said the bombing was carried out by the Islamic State extremist group.

FT, your comment is okay in Naharnets perspective. Don't worry, you might aswell turncoat now, and become M14, then you can claim "free speech is yours."