Study: Hidden Paths Could be Behind Antarctic Glacier Melt 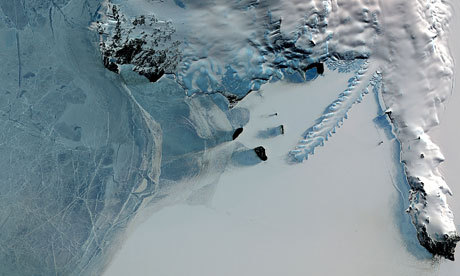 Scientists have discovered two pathways that are likely channeling warm ocean water under a massive Antarctic glacier, which could contribute to rising global sea levels, a study revealed Tuesday.

The 120-kilometer (75 miles) long Totten Glacier, more than 30 kilometers wide, is the largest in East Antarctica and melting more quickly than others in the area.

Research published in the journal Nature Geoscience showed that a trough just under five kilometers wide has formed as a gateway deep underneath the glacier, along with another tunnel.

These could allow warmer sea water to penetrate the glacier base, the researchers said.

"The Totten Glacier is the most rapidly thinning glacier in East Antarctica and this melt has the potential to drive substantial regional ice loss," Australian Antarctic Division glaciologist Jason Roberts said.

"The study identifies direct pathways for warm ocean water to reach under the glacier; a likely reason for the observed thinning."

During a voyage to the frozen region during the past southern hemisphere summer, researchers found the waters around Totten Glacier were around 1.5 degrees Celsius warmer than other areas.

Up until recently the East Antarctica ice sheet was thought to be surrounded by cold waters and therefore very stable and unlikely to change much.

The Australian Antarctic Division said there was enough ice in the Totten Glacier alone to raise global sea levels by at least 3.5 metres, roughly equivalent to the projected contribution of the entire West Antarctic Ice Sheet, if it were to completely collapse.

"While the Totten melt may take many centuries, once change has begun our analysis reveals it would likely be irreversible," said lead author of the study Jamin Greenbaum, a PhD student at the University of Texas.

The study, which included researchers from Australia, Britain and the United States, used aerial surveys from Australia's Casey station to detect the deep trenches.

Aircraft equipped with radar, laser and other sensors for determining ice thickness and mapping the bedrock and seafloor bathymetry flew over the glacier over five summers from 2008 to 2013.