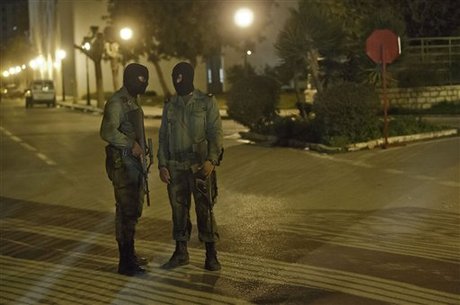 The Islamic State jihadist group claimed responsibility Thursday for an attack on foreign tourists at Tunisia's national museum that killed 21 people, as the security forces swooped on suspects.

The authorities said they had identified the two dead gunmen behind Wednesday's assault, which prompted calls for a show of national unity against extremism in the birthplace of the Arab Spring.

In an audio message posted online, IS said that "two knights from the Islamic State... heavily armed with automatic weapons and grenades, targeted the Bardo Museum."

It threatened more attacks, saying: "What you have seen is only the start."

Trade unions and other civil society groups called for a silent demonstration outside the Tunis museum where the attack killed 20 foreigners and at least one Tunisian.

"The security forces were able to arrest four people directly linked to the (terrorist) operation and five suspected of having ties to the cell," the president's office said in a statement.

Authorities say as many as 3,000 Tunisians have gone to Iraq, Syria and Libya to fight in jihadist ranks, including with IS, raising fears of battle-hardened militants returning home to plot attacks.

The presidency said soldiers would be deployed to beef up security in major cities following the museum assault.

But "we are not under siege," a presidential source said.

As international outrage grew over the worst post-revolution attack in the cradle of the Arab Spring, President Beji Caid Essebsi vowed to fight extremists "without mercy to our last breath".

The leader of the Islamist opposition party Ennahda, Rached Ghannouchi, said he was convinced that "the Tunisian people will stay united in the face of barbarity."

The media also called for solidarity, with newspaper La Presse appealing for "total unity and a sense of responsibility shared by all."

Panic had broken out as gunmen in military uniforms opened fire at visitors as they got off a bus and then chased them inside the museum.

He said a policeman was also killed but did not mention a second Tunisian victim initially reported by the authorities.

Dozens more people were wounded in the assault, in a massive blow to Tunisia's heavily tourism-dependent economy.

After cowering in fear in the museum during the night, two Spanish tourists were discovered alive and well, officials said.

In a show of defiance, the government said the National Bardo Museum would reopen early next week.

He said Abidi was known to the police.

Tunisia has seen an upsurge in Islamist extremism since the 2011 revolution that ousted longtime strongman Zine El Abidine Ben Ali and sparked the Arab Spring uprisings around the region.

The museum assailants were "probably" Tunisian, the interior ministry said.

Nine of the slain tourists were from the MSC Spendida cruise ship, whose owners said a special psychologist unit had been set up for passengers.

MSC Cruises and Italian operator Costa Crociere said they would divert cruise ships which had been due to berth in Tunis.

The attack appeared to be the worst on foreigners in Tunisia since an al-Qaida suicide bombing of a synagogue killed 21 people on the island of Djerba in 2002.

It was also the first time civilians have been targeted since the revolution.

The assault sparked outrage, with hundreds of people gathering late Wednesday in a major thoroughfare of the capital, singing the national anthem and shouting slogans against the attackers, labeling them terrorists.

A Japanese survivor described how she and her mother were shot in the hail of bullets.

"I was crouching down with my arms over my head, but I was shot in the ear, hand and neck," 35-year-old Noriko Yuki said from her hospital bed in comments aired by Japanese broadcaster NHK.

"My mother beside me was shot in the neck."

"My co-workers were screaming 'Run! Run! Shots are being fired!'" she told Agence France-Presse. "We escaped out the back door with co-workers and some tourists."

Tunisia has taken pride in forming a democratic government and achieving stability since the Arab Spring -- in marked contrast to countries such as Egypt and Libya.

But dozens of police and military personnel have been killed or wounded in attacks blamed on Islamist militants.

for the same reason syria never attacked it in 40 years but calls itself "axis of resistance" LOL!....