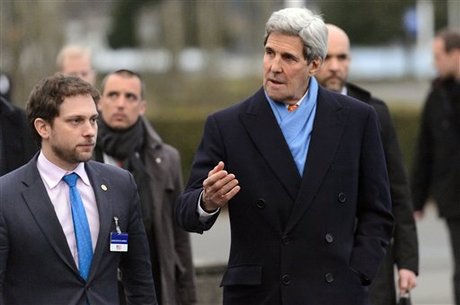 U.S. and Iranian diplomats gather at a Baroque palace in Europe, a historic nuclear agreement within reach. Over Iraq's deserts, their militaries fight a common foe. Leaders in Washington and Tehran, capitals once a million miles from each other in ideological terms, wrestle for the first time in decades with the notion of a rapprochement.

Yet the old adversaries are locked in a proxy war across an ever more volatile region. In Syria, the United States arms insurgents seeking to oust the Iran-backed government. In Lebanon, the Palestinian territories and elsewhere, Iran supports militant groups determined to end Israel's existence. And now in Yemen, the U.S. is backing a military intervention by Sunni powerhouse Saudi Arabia against a Shiite rebellion aided by Iran.

Nothing is simple amid the overlapping fault lines of Sunnis and Shiite, Arabs and Persians, Muslims and Jews, and the countless tribal affiliations that define this part of the world. And six years after President Barack Obama swept into office hoping to simplify America's role there by ending the long war in Iraq, engaging Iran and Syria and trying to advance a long-sought Israeli-Palestinian peace agreement, U.S. involvement in the region — and its relationship with Iran — seem more complicated than ever.

"There's no contradiction," State Department spokesman Jeff Rathke said Thursday as he was questioned on the Mideast's concurrent crises. "We have made clear throughout the process of the nuclear negotiations with Iran that we have serious concerns about Iranian behavior in a number of areas. Talk about terrorism, talk about human rights, talk about the fate of American citizens who are inside Iran in detention. The focus of the nuclear negotiations is on the nuclear issue."

What may be different in American policy today is the lack of a unifying, overarching philosophy. During the Cold War, it was the defeat of communism. The focus shifted to the war on terror after the attacks of Sept. 11, 2001. In the early, heady days of the Arab Spring, the United States briefly put democratic expansion at the top of its agenda. But right now, the strategy is less ideological, offering greater flexibility but perhaps less certainty for friend and foe alike.

For his biggest national security goal right now, Obama is banking on cooperation with Iran. Secretary of State John Kerry is leading the U.S. in talks this week in Lausanne, Switzerland, hoping to reach a framework accord by month's end that would curb Iran's nuclear program in exchange for relief from crippling economic sanctions.

But Obama has said a deal could mean much more, speaking of a "better path" between countries that have had no diplomatic relations since the 1979 rebellion and the hostage crisis at the U.S. Embassy in Tehran. In a Persian New Year address last week, he cited the potential for greater trade ties, foreign investment, cultural exchange, scientific partnerships and jobs for young Iranians.

Nuclear compromise or not, the U.S. and Iran are unlikely anytime soon to become friends. In recent weeks the Iranians simulated an attack on a U.S. aircraft carrier. Their supreme leader, Ayatollah Ali Khamenei, declared at a rally, "Death to America." But the possibility of an agreement and even the tiniest steps toward bridging the U.S.-Iranian divide are prompting deep concern and even opposition among America's traditional allies in the neighborhood.

Israel has lobbied aggressively against the deal in the United States, claiming it would pave the way for an Iranian nuclear arsenal. Saudi Arabia has threatened to explore greater nuclear technology of its own. Other Sunni governments want greater U.S. commitment to their defense. And all have spoken gravely of the implications of what they see as Washington cozying up to Tehran.

In response, the U.S. has emphasized repeatedly it isn't shifting alliances.

In at least one of the Middle East's many conflicts, however, the U.S. and Iran are actively supporting a common ally: the Iraqi government.

American airstrikes started this week to help Iraqi troops retake the northern city of Tikrit from Islamic State extremists. Until recently, the Iraqis fought side-by-side with Shiite militias and Iranian special forces. Their withdrawal was a condition for the American air intervention, Army Gen. Lloyd Austin said. "I will not — and I hope we will never — coordinate or cooperate with Shiite militias," he told a congressional panel Thursday.