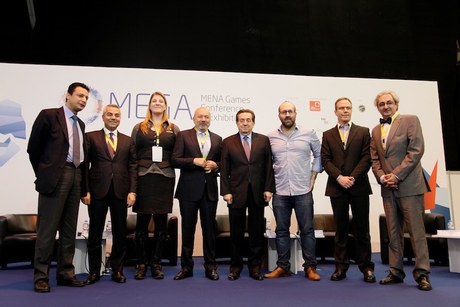 Addressing more than 400 delegates representing some of the biggest local, regional and international games’ developing companies, and more than 50 leading experts and speakers, H.E highly valued the initiative of organizing such a conference. In his opening speech, Harb said that “holding this conference in the Lebanese capital, Beirut, proves that the city remains the Arab capital of innovation and entrepreneurship.” Harb welcomed the event’s positive role of “opening networking channels between the digital community members on two sides of the world, stimulating the Arabic knowledge economy, supporting new startups, and creating job opportunities for the young and ambitious innovators.”

“Most of the developing nations found in the digital sector their golden chance to answer some of the economic challenges such as high rates of unemployment, and therefore embarked on ambitious plans to establish the ecosystem necessary for the development of digital industries and culture of entrepreneurship, creativity and innovation”, Harb reminded the audience, announcing that “Lebanon has started to walk this path through the conclusion of an agreement between the Ministry of Communications and the World Bank to finance the USD 12.8 million "Mobile Internet Ecosystem Project", that would promote innovation and entrepreneurship among highly skilled young Lebanese, and help reverse the trend of rising unemployment, especially among young people, and enhance their skills to meet the international standards for the production of information and communications technology."

Harb hoped at the end of his speech that “such agreements would transform Lebanon form just a consumer market to a pioneering production hub through developing a comprehensive system for these industries, and turning Beirut and other Lebanese cities into an attraction point for businessmen and investors.”

In his welcome note, IFP Group Chairman and CEO, Albert Aoun, confirmed that “organizing this event reflects the deep belief shared by the group and its international partners in the capabilities and talents of the Lebanese and Arab youngsters, and their ability to develop regionally and globally.”

Alfa Chairman and CEO, Marwan Hayek, addressed the issue of globalization in the games market, calling for “quick steps to catch up with the fast pace of the sector’s growth and development on the global level.”

Speaking of (igda) and Media Evolution, MENA Games Conference is particularly exceptional compared to similar events in the region because of the participation of a wide range of elite investors, managers and representatives of business incubators dedicated to supporting emerging digital startups from different countries, notably the United States and international companies, Germany, Sweden, Britain, Canada, China, Turkey, and others. Thus, the conference will provide Arab entrepreneurs with a promising and unique opportunity to present their ideas in their early stages, and will also allow emerging companies that to seek the support they need to move on to a professional level, with the help of capable partners such as (igda), and some of the regional developers’ associations from the United Arab Emirates, Bahrain, Morocco, Tunisia, Egypt, and others.