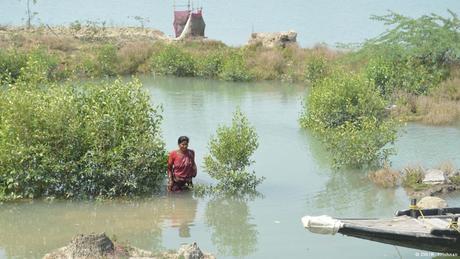 The 140,000-hectare Sundarbans is one of the largest mangrove forests in the world, and a sanctuary for rare Ganges and Irabati dolphins, as well as the estuarine crocodile and Indian python. The UNESCO world heritage site is also home to over 500 Bengal tigers.

But coastal erosion and increasing sea levels are gradually devouring the vast forests shared by India and Bangladesh. Flooding of low-lying deltas and acidification of soil are also affecting the livelihoods of the local population and the area's biodiversity.

A number of people from the Sundarbans villages have migrated to the state capital, Kolkata. Rising sea levels and salinity have deprived the people living in the core Sunderbans areas of their main sources of livelihood.

"Rising tides, cyclone and climate change have affected our livelihoods. It is not easy to find the fish, and many people have changed their professions," Satyanath Patra, a fisherman, told DW.

Some of these people – known as "climate refugees" – are now working in the construction industry or as domestic workers.

Recent studies and satellite images show that nearly four percent of the Sundarbans forests (9,990 hectares of land) have disappeared due to land erosion in the past few years. Several islands in this 100-odd island conglomerate have also vanished, whereas a dozen others have been abandoned because of the rising sea levels.

"The coastline is retreating by as much as 200 meters a year. A lot needs to be done to change the scenario," Sanjay Gupta, a senior consultant at the World Bank, told DW.

A recently released report by the financial institution says the cost of environmental damage associated with ecosystem degradation and biodiversity loss in the area amounts to some $107 million per year.

Human intervention in the Sundarbans, which include illegal construction of buildings, brick kiln encroachments and shrimp farming, has also put an enormous pressure on the area's fragile ecosystem.

In December last year, a tanker sank and dumped hundreds of liters of furnace oil into the country's protected delta after a collision with another vessel. The oil spread over 350-square-kilometer area straddling Bangladesh and India.

"Unless something drastic is done by the various stakeholders in the Sundarbans, we could be losing these pristine forests very soon. This vulnerable population is least prepared to cope with the devastating effects," Jayanta Basu, an environment and health expert, told DW.