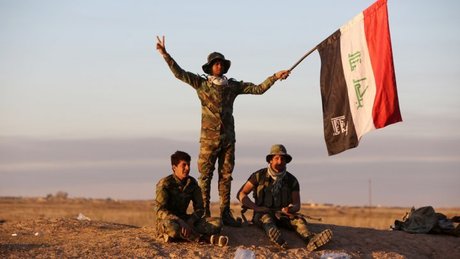 Exploding bombs send clouds of dust rising into the air over the Iraqi city of Tikrit, houses and businesses burn and civilians are nowhere in sight.

Iraqi forces have retaken Tikrit from the Islamic State (IS) group after a month-long operation, but the task of returning some semblance of normal life to the city will take far longer.

Bombs left by the jihadists are the biggest threat, with Interior Minister Mohammed al-Ghaban saying 185 explosives-rigged houses and some 900 other bombs had been found as of Wednesday.

Military engineering teams would "clean these areas and clear them of bombs," he said, but there are concerns that there are not enough specialized personnel to handle the large quantity of booby traps left by IS.

Some are turning to less sophisticated bomb disposal methods, with one militiaman suggesting that burning houses was a means of detonating explosives within.

A militiamen also fired a rocket-propelled grenade at a parked car he said he suspected of being a car bomb.

Even if such methods do remove explosives, they also cause damage to property that will anger residents and undermine long-term stability in Tikrit.

Looting and vandalism are also an issue.

Pro-government militiamen quickly set about spray-painting the names of their groups on homes and businesses in the city, in some cases marring windows that had survived the fighting unbroken.

They also stole items including clothing and toiletries from shops in central Tikrit, and a camouflage-uniformed man drove a truck full of brand-new tyres and a generator out of the city.

Mannequins were strewn like fallen bodies on the pavement in front of one shop, as were clothing and boxes.

Repairing the damage from the fighting, and that caused in subsequent fires and explosions, will take months if not years.

The level of destruction varies, with some buildings untouched or just pockmarked by bullets, while others are heavily damaged.

Former Iraqi dictator Saddam Hussein's massive palace complex on the city's east side was especially hard hit, with some palaces smashed by shelling or air strikes.

The twisted wrecks of vehicles lie under a bridge leading from the compound across the Tigris River, and a bombing by IS left a gaping hole in the bridge itself, rendering it unusable.

An official from the governor's office said municipal teams were already at work in some neighbourhoods, clearing debris and restoring power, but bombs will hamper such efforts.

Staff Lieutenant General Abdulwahab al-Saadi has said he wants local police and volunteer fighters to be responsible for security inside Tikrit.

But for now, the city center is held by a mix of federal policemen and militias, with the latter especially unpalatable to Tikrit's Sunni Muslim residents.

There are also tensions among various forces, with militiamen disparaging the army, the army suspicious of the militias, and the police saying others are taking credit for their victory.

"They were outside the city talking to the media while we were fighting," one federal policeman said.