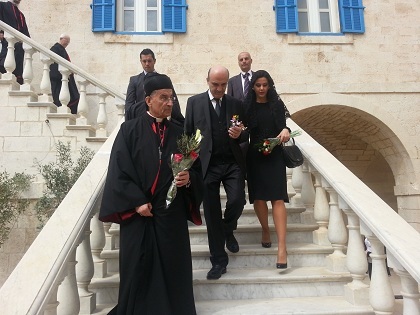 Lebanese Forces leader Samir Geagea stated on Friday that the election of a new president lies in the hands of lawmakers, not regional powers, noting that the breakthrough in reaching an agreement over Iran's nuclear program may positively affect Lebanon.

He said after holding talks with Maronite Patriarch Beshara al-Rahi at Bkirki: “In principle, there is nothing stopping Free Patriotic Movement leader MP Michel Aoun from becoming president, but we have to take into consideration his political platform.”

He added: “The Lebanese should not believe that the nuclear deal with Iran will reflect positively on us. Only the Lebanese can bring about positive developments, particularly over the presidential elections.”

“The other camp has unfortunately maintained its political positions,” continued the LF leader.

“I don't believe that the elections will be held anytime soon,” Geagea told reporters, while urging the political powers to change their stances and head to the polls.

Aoun's Change and Reform and Hizbullah's Loyalty to the Resistance blocs have been boycotting the presidential elections over a dispute with the March 14 camp over a compromise candidate.

Addressing the LF dialogue with the FPM, Geagea stated: “Our talks are tackling various issues.”

“We have disagreed on certain affairs, but we are trying to resolve them. We have however reached an agreement on others,” he revealed.

“We are working on the basis that a meeting with Aoun will take place at some point,” he remarked.

keep the good work for once jaja

He better not allow Aoun after all of this time with a void. He needs to come up with a consensual candidate. We need someone in the middle. We are not ready for a partisan President yet.

Mr. Geagea, how do you honestly expect a demented resident evil man like Aoun the claoun, a man known to excel on his cheap culture of lies, fabrications, deceit, greed, treachery, a man known for his dirty big-mouthism, for his legendary cowardice, a man whose evil can turn an unsuspecting person from thinking logically and rationally into a person devoid of all reason? Geagea, do you seriously believe that Aoun will ever change? Haven't you not paid enough by giving him an iota of reasonable doubt? haven't you made us pay even more for your blinking belief even if momentarily in Aoun the claoun? Ya 7akim, please, zi7lak 3ala janab, enta wou yeh, and let us have better people to fill this post, please, if you please, NOW!!

It's a real pity and a serious tragedy to see a human being end up lowering himself to such levels as you're now doing. I focus on the thread, you focus on your hatred of posters. But if for anything, we all take comfort in the fact that you got yourself a serious whipping in the butt, to the point where you dare no longer appear as a so-called feline. So long.

@Humble, just watch what the traitor caporal did, his role is sooooo clear for all to see: https://www.youtube.com/watch?v=iCSFP6gYHyY

Ya 7akim,, please be very careful, contrary to your position of then in 1989, people like me told you, "Al general Ma Bi Moun". Today in 2015 we are telling you again, "Al general ba3dou la liom MA Bi Moun". Wou nou2tah 3al saterr.

I understand you are talking about imbassil the little Hitler, a gangster who is worshipped by his 3ammo, but hated by the others...
Yes he has definitely acquired a house in London for 16 million pounds.

geagea from the beginning said that he is not holding onto the seat and would compromise for a consensual candidate. It is not M14 nor Geagea that are blocking the presidency but Aoun supported by Hizbollah. Aoun is a non consensual confrontational person and he is just willing to do anything to get the presidency even if that means crippling the political work in lebanon resulting in economical strive with the consequence of immigration of our youth.