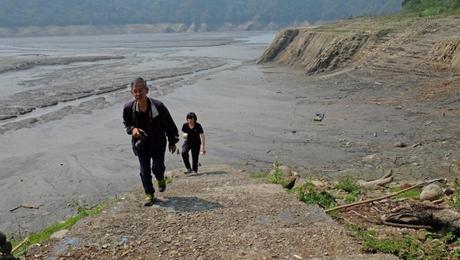 Taiwan launched water rationing in some major cities on Wednesday as the island battled its worst drought in over a decade, following the lowest rainfall in nearly 70 years.

The state water company cut supplies to around 800,000 households and businesses in Taoyuan city as well as parts of Hsinchu county and New Taipei City in northern Taiwan for two days a week for an indefinite period.

The government said that it was forced to impose the measure as the water supply situation was "urgent".

It comes after the lowest rainfall across the island last autumn and winter since 1947.

Parts of the vast Shihmen Dam in Taoyuan that supplies several cities in northern Taiwan have dried up leaving a muddy crater.

The dam held just 24.5 percent of its capacity Wednesday, according to the Water Resources Agency.

"We continue to monitor the situation to determine how long the rationing will go on, as the supply of Shihmen dam is tight. We urge people to conserve and store water," said Cheng Tsao-ming, an official at the Taoyuan city government.

Homes, schools and businesses are relying on water stored in large tanks and are adopting water-saving measures, including recycling water for gardening and closing swimming pools and gyms on rationing days.

Some are concerned that their businesses will suffer if the water rationing continues.

Showlin hair salon in Taoyuan said it had to turn away some customers.

"Even though we have three water storage tanks we still have to limit our services. I am worried that we will have to start taking unpaid leave if the rationing goes on much longer," said a worker at the salon, who gave her family name as Tsai.

"I have still opened my business today as I have a big water storage tank to supply my shop, but I am worried about losing customers if the situation worsens," said the owner of Yang Kuang car wash in Taoyuan, who declined to give his name.

Despite light rains this week, the government has warned that the dry spell is forecast to continue and that monsoon rains may not happen at all this season.

The government last imposed water rationing and anti-drought measures in 2001 in parts of Taiwan, including Taipei.

At that time water supplies to car washes, saunas and swimming pools were suspended in the capital while government agencies, schools and hotels were ordered to slash their water consumption by 20 percent.