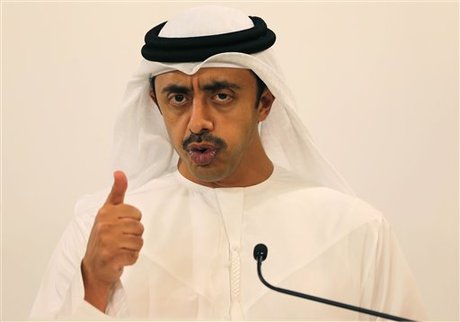 The Emirati foreign minister said Wednesday that any Saudi-led ground operation against rebels in Yemen would need a green light from the country's President Abedrabbo Mansour Hadi.

"We cannot limit our options" in Yemen, Sheikh Abdullah bin Zayed Al-Nahyan told reporters, questioned on whether the Saudi-led coalition of which the United Arab Emirates (UAE) is a member planned to send in ground troops.

But "we will not carry out any action without a green light" from Hadi's "legitimate" government, he said at a joint press conference with his Yemeni counterpart, Riyadh Yassin.

The coalition on March 26 launched air strikes against Shiite Huthi rebels and their allies who have challenged Hadi's rule.

Hadi fled the country to neighboring Saudi Arabia after rebels closed on his last key foothold Aden in the south.

"Our military operation is to defend the legitimate authority, defend Yemen, and we can not place restrictions" on the action, said Sheikh Abdullah.

"Our goal is to achieve a political settlement" involving all parties, including the Iranian-backed Huthis, the UAE foreign minister said.

He criticized the policies of Shiite Iran, whose Arab neighbors in the Gulf accuse of interference in Iraq, Syria and Lebanon as well as Yemen.

The problem "is not confessional," said Abdullah.

But "brothers in Iran believe in the idea of exporting the (1979 Islamic) revolution, which is part of their constitution and regime" policy, he said.

given that hadi is a traitor residing in saudi arabia, im sure it wont be too hard for his light to turn green, after all, his pockets will be filled with us greenback while yemens streets with blood.