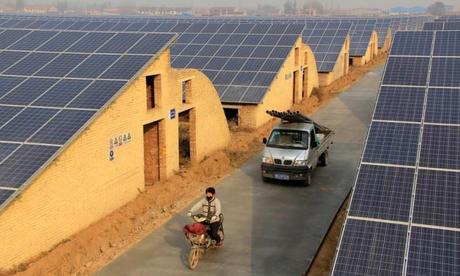 Major economies would boost their prosperity, employment levels and health prospects if they took actions that limited global warming to 2C, according to the first analysis of emissions pledges made before the UN climate summit in Paris later this year.

Europe has promised a 40% emissions cut by 2030, compared to 1990 levels – and the report says this will bring real benefits, including 70,000 full-time jobs, the prevention of around 6,000 pollution-related deaths, and a €33bn cut in fossil fuel imports.

But if emissions were slashed by around 55% – the study’s proposed route for holding global warming to two degrees – those benefits would multiply to $173bn fuel savings, 420,000 full-time clean energy jobs and 46,000 lives saved, its authors say.

31 March is the deadline for developed countries to submit their climate pledges for the conference (so called Intended Nationally Determined Contributions, INDCs), but few have yet done so and nations such as Canada and Japan are expected to miss the bell.

“This report adds to the growing body of evidence that greater climate ambition means better health,” said Anne Stauffer, the deputy director of the Health and Environment Alliance.

“The massive health benefits expected from mitigation action not only include premature deaths avoided but also reduced healthcare costs and increased productivity. This should be welcome news for European decision-makers.”

In other parts of the world, the effects of increased climate ambition would be even more dramatic, according to the New Climate Institute’s (NCI) analysis which uses data from the International Energy Agency.

Putting China on course for a world warmed only by two degrees would save over a million lives and create almost 2m jobs – compared to the 100,000 lives and 500,000 jobs set out in its climate deal with the US.

“Despite the major achievements of the INDCs, this study has shown that the potential co-benefits of strengthening INDCs to meet a 2C compatible trajectory are many times higher than those already achieved,” the paper says.

Global temperatures have already risen by 0.85 degrees since 1880, according to the UN’s Intergovernmental Panel on Climate Change (IPCC). As the warming effect of CO2 emissions is thought to take a decade to materialize, we may already be committed to over one degree of warming.

In the long term, that is likely to risk the future of coastal cities such as New York, Shanghai and Calcutta, according to scientists at the Potsdam Institute of Climate Impact Research.

If the planet warms by 2C by 2100, the Royal Society expects to see a third of the world’s currently-cultivated agricultural land disappear, the bleaching of all coral reefs, and an increase in water stress for 410m people.

At a rise of 4C, the limits for human and environmental adaptation are likely to be exceeded in many parts of the world, a 2010 paper by the Society said. It envisaged around half of the world’s current agricultural land becoming unusable, sea level rises of up to two metres, and the extinction of about 40% of the world’s species, as droughts and wildfires ravaged the globe.

“The ecosystem services upon which human livelihoods depend would not be preserved,” the study found.

“We have the technology and there are millions of jobs possible from the necessary investment and millions more saved if we avoid the devastation of extreme climate change. There are no jobs on a dead planet.”

There are no actions that can be taken to do anything of the sort. Cutting back on hydrocarbons will damage the poor and the planet's climate will notice little difference.

I'm making over $7k a month working part time. I kept hearing other people tell me how much money they can make online so I decided to look into it. Well, it was all true and has totally changed my life. This is what I do... www.globe-report.com