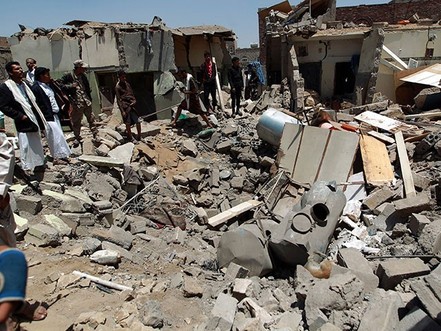 Key infrastructure in war-torn Yemen, including water supplies, health services and telecommunications, are on the verge of breaking down due to a major fuel shortage, a United Nations official said Saturday.

"The services still available in the country in terms of health, water, food are quickly disappearing because fuel is no longer being brought into the country," Johannes van der Klaauw told Agence France Presse in Djibouti.

"Without fuel hospitals can't work, ambulances can't go out. You can't have the water system working because water has to be pumped. The telecommunication network risks shutting down. This all extremely preoccupying. If something is not done in the next few days in terms of bringing fuel and food into the country, Yemen is going to come to a complete stand-still," he warned.

The official said an arms embargo was also having an impact on the delivery of humanitarian supplies.

"We have the ships which can dock into the ports, we have the aircraft. However the arms embargo has unintended consequences for humanitarian aid," he said, adding that UN Secretary General Ban Ki-moon has called for a "humanitarian pause".

"We must find a way to have this happen. At least for a couple of days."

wow what a momentous study! and what difference does it make to most of its inhabitants, Lebanon is not far off in standards of services.