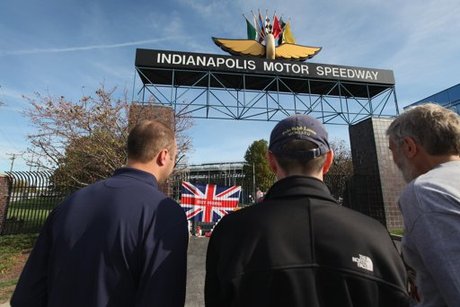 British Formula One world champions Jenson Button and Lewis Hamilton lead the tributes on Monday to fellow Brit Dan Wheldon, the IndyCar driver killed in a 15-car crash during an Indy 300 race in Las Vegas.

Wheldon, 33, was airlifted to hospital after he was involved in the horrific crash in lap 11 of the race on Sunday but died of his injuries.

Button, the 2009 Formula One world champion, posted his condolences on Twitter.

"Just woken up to the most horrific news... Dan Wheldon RIP.

"I have so many good memories of racing with Dan in the early 90's, a true fighter. We've lost a legend in our sport but also a great guy.

"I can't begin to imagine what his family are going through and my thoughts are with them at this very difficult time."

"This is an extremely sad day.

"He was an extremely talented driver. As a British guy, who not only went over to the States but who twice won the Indy 500, he was an inspirational guy, and someone that every racing driver looked up to with respect and admiration."

Scotland's Dario Franchitti, who was on Sunday confirmed as the IndyCar 2011 champion, expressed his shock.

"Right now I'm numb and speechless. One minute you're joking around in driver intros and the next he's gone," said Franchitti.

"He was six years old when I first met him. He was this little kid and the next thing you know he was my team-mate. We put so much pressure on ourselves to win races and championships and today it doesn't matter."

Other drivers and sports stars also paid their respect via Twitter after the accident.

"I looked up to you both as a racing driver and a person/friend. You will be forever missed. RIP Dan Wheldon," wrote IndyCar driver Marco Andretti, whose website, www.marcoandretti.com, changed to show the words "Goodbye, Friend" after the tragedy.

"Just got out from the plane and got the terrible news about the death of our friend Dan Wheldon. Will always remember the great times we had at karting in Brazil my friend. Rest in peace," said Rubens Barrichello, Formula One driver for Williams.

Wheldon moved to the United States in 1999 and six years later became the first Englishman since Graham Hill in 1966 to win the Indianapolis 500.