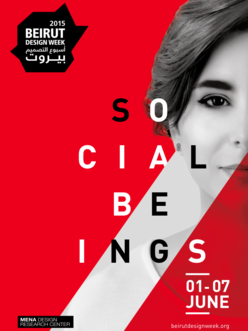 Get ready for Beirut Design Week to kick off on June 1, 2015 under the theme “Social Beings” at Beirut Souks. The theme is based on the principles of BDW that nurture the relations between the people that make up the creative industry of Lebanon through the sharing of skills and expertise.

“Forget pretty objects. Design is a tool for innovation in social change and business development,” said Doreen Toutikian, director of Beirut Design Week. “We believe in the value of design, which is far more than just aesthetics.”

During one full week, 150 events in almost 100 locations around the design capital in the MENA region will celebrate the best of Lebanese and International Design, opening the conversation to 4,000 participants daily.

The highlights of Beirut Design Week 2015:

With a focus on inclusivity rather than elitism, this year BDW will present ‘The Makers’ an exhibition highlighting the potential of digital fabrication, and ‘Based in Beirut’, another collective exhibition which will feature up-and-coming local designers. All these exhibitions will be launched on the opening day in Beirut Souks at 6pm.

This year’s edition of the Beirut Design Week will prove to be the most elaborate and informative version yet of the festival, and will welcome thousands on a daily basis to explore and enjoy the various activities throughout the week, where design in all its forms takes center stage.

Beirut Design Week is an initiative of the MENA Design Research Center, a Beirut-based nonprofit launched in 2012, that has developed an established annual platform to network, share knowledge, and showcase talent in order to strengthen the creative economies, develop entrepreneurship, and promote Lebanon’s innovative culture.

Successfully running for the 4th consecutive year, BDW is the largest design festival in the Middle East and North Africa. With partners such as the Dutch, Finnish and Danish embassies, along with the British Council, the French Institute and the Goethe Institute, Beirut Design Week celebrates cultural exchange through design.