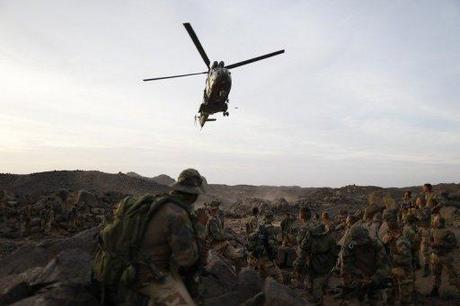 Based in Mali's inhospitable northern desert, French troops are waging an attritional campaign against a ghost-like, invisible enemy -- a master in the guerrilla art of hit-and-run.

More than two years after the French-led Operation Serval routed jihadists advancing on the capital Bamako, armed groups in the area are no longer able to carry out coordinated attacks.

"Since Serval they have suffered high attrition rates. They no longer have freedom of action on the ground," the mission's commander, Colonel Luc Laine, told Agence France Presse.

"They are scattered, they are watching us, invisible. Their actions are disjointed, unfocused. There is no common thread."

Shortly after 4:00 am (0400 GMT) on Friday, a rocket fired from a plateau overlooking Gao city fell on the nearby camp used by the United Nation's MINUSMA peacekeeping mission, causing no casualties but underlining the ever-present danger.

"That's what's hard. We're fighting against an invisible enemy," said Laine, who at home commands the 21st Marine Infantry Regiment, based in Frejus in the south of France.

"Their modus operandi is hit-and-run tactics. What is difficult is that we never see them, but we know they are watching us.

"The risk is that you let down your guard because, as you can't see anyone, you might be inclined to believe that they are not there. So you become less vigilant and therefore vulnerable."

Taped to the wall of his office is a picture of the one-eyed Algerian Islamist commander Mokhtar Belmokhtar, one of the main jihadist figures in the Sahel.

"That's why I have his picture here -- to remind me that he exists, and he wants to harm me," Laine said.

"They are still there, but in a diffuse, furtive sense. They can no longer lead major combat operations, but they can exploit the slightest lack of vigilance.

"They are smart, they have adapted. They hide their weapons. If they travel by SUV, it is never in a convoy, but one-by-one.

"It's tricky for us, to distinguish between the trafficker, the terrorist and the (Tuareg rebel). Some offer their services to the highest bidder. It's a way of life for some people here."

Stationed with around 700 men in a makeshift township of tents and concrete buildings near Gao airport, Laine commands the Western Desert Tactical Group, one of the two components of France's Sahel counter-terrorism mission, Operation Barkhane, headquartered in Chad.

The troops patrol the region regularly, for reconnaissance and as a show of strength, but Laine knows that the enemy is aware of their every move.

They are only really able to surprise the jihadists on special forces operations, like the raid on May 18 that killed key jihadist leader Amada Ag Hama, known as "Abdelkrim the Tuareg".

"We know they are watching everything we do. As soon as you move, as soon as we leave here, they are notified," Laine told AFP.

"For us it is very difficult to tell the difference between the guy who calls his boss or his wife and the one who calls the head of his terrorist group."

Laine says his goal, having seen northern Mali liberated in 2013, is that it can "become a hospitable territory once more".

"We have to stop them doing again what they did in 2013. Our long-term goal is that the Malian army and MINUSMA take over this mission."