Lebanese Entrepreneur Ziad Sankari, Founder of CardioDiagnostics, from Berytech Fund I Portfolio, at the White House 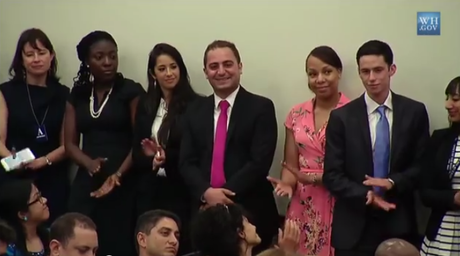 The White House brought together, in May, emerging entrepreneurs from across the United States and around the world to highlight the importance of investing in women and young entrepreneurs to create innovative solutions to some of the world’s toughest challenges, including poverty, climate change, extremism, as well as access to education and healthcare, a press release said on Monday.

This event comes ahead of the President’s travel to this summer’s Global Entrepreneurship Summit in Kenya and provides a unique opportunity to galvanize global attention on emerging women and young entrepreneurs.

The event will recognize the impact made by a number of U.S. government-led initiatives.

In 2014, the Administration set a goal for its best entrepreneurship programs, now to be led under the umbrella of the Spark initiative, to generate over a billion dollars in private investment for emerging entrepreneurs by the end of 2017, with half of this goal to be raised for women and young entrepreneurs.

The White House will name nine more top American entrepreneurs to be named as Presidential Ambassadors for Global Entrepreneurship to contribute to this goal. The world’s brightest entrepreneurs still require further support through the commitments and collaboration of governments, investors, businesses, organizations and individuals. The event will also recognize the creation of the Spark Global Entrepreneurship coalition to further these objectives.

Speakers for the event will include five entrepreneurs from around the world and from various U.S. government programs, cast members of ABC’s TV series Shark Tank and other organizations. Ziad Sankari is one of these speakers, he is the founder of CardioDiagnostics, a pioneer medical technology company specialized in cardiac care solutions, the release added.

CardioDiagnostics is one of Berytech Fund I portfolio company, which brings the best cardiac monitoring innovative technologies to the health sector. Following the rise of Lebanese talented entrepreneurs and Lebanese startups success stories, Berytech Fund II was recently launched with more than $50M to invest in innovative businesses.

“We want to empower pioneers like Ziad Sankari. Where’s Ziad? There he is, right next to her. When he was 17, he lost his father to a heart attack. And Ziad first came to the United States to study on a Fulbright. Then, through one of our science and technology competitions, he earned seed funding to develop his innovation, which is a heart-monitoring technology that clips to your waistband. So today he’s improving the way we respond to cardiac incidents, which will have enormous ramifications not just in places like Lebanon but potentially all around the world. So, thank you, Ziad, for helping to save lives”, declared President Obama.

Ziad Sankari started CardioDiagnostics in 2012. He lost his father to a heart attack when he was seventeen and his family lacked access to proper healthcare.

He decided to pursue his studies in understanding the electrical activity of the heart and how monitoring and analyzing that activity can save lives.

Today, the company uses FDA-approved wearable devices that are 24/7 GPS-enabled heart rate monitors allowing for heart monitoring centers to communicate diagnostic and preventive information to patients in the United States, where the center has over 40 employees, and in Lebanon.

In 2008, Ziad attended Ohio State University on a U.S. Fulbright scholarship. After returning to Lebanon, he was selected to pitch his idea at the 2011 Global Innovation through Science and Technology’s (GIST) Tech-I competition where he won first place.

Through GIST, a U.S. Department of State funded initiative, Ziad received his first round of seed funding and traveled through various U.S. cities to expand his network, learn how to negotiate, and connect with mentors. Given his experiences, Ziad sees education as essential to successful entrepreneurship and to combat rising issues of poverty and extremism. He hopes to support other startups and build a high-performing educational system in Lebanon and throughout the Middle East that leverages U.S. expertise and connections to open a world of opportunities to younger generations.

You can watch the video, live from the event, on the following link: https://youtu.be/qHKWNsvE_uE

Lebanon has the very evil Jihadist and culture of death.
Lebanon has its fair share of the losers, corrupt, and dark side
Lebanon has its bright, hard working, life loving stars like Ziad and individuals like Ziad is what keeps us hopeful in a better Lebanon.