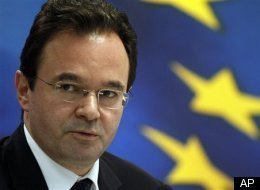 European ministers embarked Saturday on overhauling a rescue package for Greece, ahead of crunch French-German talks to resolve a row over a crisis that threatens to cause global recession.

Amid dire warnings that the debt crisis is endangering all of Europe, ministers said that banks had to take a greater share of the pain in a rescue package agreed in July but already seen as insufficient to solve Greek woes.

The head of the Eurozone finance ministers, Jean-Claude Juncker, told reporters as he arrived for talks that lenders had to accept a "substantial increase" in a write-down of existing debt to boost the much-needed aid.

Diplomatic sources said Europe and the IMF would only proceed with a second planned Greek bailout of 109 billion Euros ($151-billion) if banks accepted losses of "at least 50 percent" on their debt holdings.

In the July 21 accord, banks volunteered to take a 21-percent loss or "haircut" on their stock of Greek debt.

To prevent lenders being dragged into the mire by these losses, ministers from the whole 27-nation EU began talks early Saturday on pumping in more capital to key banks, but warned they must make concessions in return.

Banks should not expect "freebies" from taxpayers, said Sweden's finance minister Anders Borg as he arrived for talks.

The EU wants banks to raise their core cash reserves -- so-called "tier-1" capital -- to nine percent, but the idea of forced recapitalization has been poorly received by the banking community.

The European Banking Authority (EBA) has estimated that between 80 and 100 billion Euros is needed to restock banks' capital bases.

But this figure appears unlikely to reassure jittery markets, since the IMF has estimated that at least twice this amount is needed.

Still unresolved is a spat between the two major players over how best to maximize the firepower of the EU's 440-billion-euro bailout fund, the European Financial Stability Facility (EFSF).

France wants to allow the fund to borrow from the European Central Bank but this proposal has been rejected by Germany.

Berlin would prefer to use the cash to insure investors against future potential losses, hoping this will restore much-needed confidence in the bonds of shaky Eurozone members.

French President Nicolas Sarkozy and German Chancellor Angela Merkel were due to meet on Saturday evening in a bid to force a breakthrough before a summit of all the EU leaders a day later.

Meanwhile, the finance minister of Britain, which is not in the euro, warned that the crisis threatened to harm the entire continent and ramped up pressure for a quick and comprehensive solution.

"The crisis of the Eurozone is a real danger to all of Europe's economies, including Britain," said George Osborne.

"What we're going to be arguing for at this meeting is a comprehensive solution to this crisis. We've had enough of short-term measures, sticking plaster that just gets us through the next few weeks," added the minister.

However, Eurozone ministers did achieve one small breakthrough late Friday by unblocking eight billion Euros in EU-IMF aid for Greece from a first bailout package in 2010 that was quickly overtaken by events.

A source close to the talks said the head of the International Monetary Fund would recommend unlocking its 2.2-billion-euro portion, clearing the way for the cash that Athens desperately needs to pay public sector workers and pensions.

The money was originally scheduled to be released in August but was held up in troubled talks between Athens and its creditors on Greece's progress in reducing its vast debt mountain, raising the specter of bankruptcy.

Nevertheless, despite mounting international pressure to come up with a final deal at least before the group of 20 leading industrial economies meet in Cannes on November 3-4, no all-encompassing deal is expected over the weekend.

Expressing frustration at the inability to forge a consensus, Juncker has warned that the EU's divisions were sending "disastrous" signals to the rest of the world.

And EU President Herman Van Rompuy has acknowledged that Sunday's summit is now "the first of a two-step process" that will culminate in "decision making" on Wednesday.