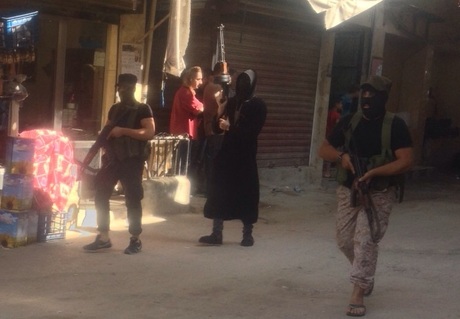 “The joint security force has deployed in the Taytaba neighborhood where the fighting had erupted,” NNA said.

Sidon MP Bahia Hariri of the al-Mustaqbal bloc had contacted officials from the Fatah, Hamas and Usbat al-Ansar movements prior to the truce, urging them to step up their efforts to pacify the situation.

Hand grenades and RPG rockets were used in the confrontation, it added.

The agency identified one of the dead as Palestinian national Mahmoud Samih and two of the wounded as M. Othman and O. Zubeidat.

Several shops and cars sustained material damage as a house went up in flames after it was hit by a shell.

The Palestinian forces exerted efforts to contain the situation after a state of extreme tension engulfed the camp, the agency said.

It said masked gunmen appeared in several neighborhoods and that residents made several appeals for an end to the fighting.

“Palestinian National Security Forces chief Maj. Gen. Sobhi Abou Arab is presiding over a broad meeting with the youth committees at the NSF headquarters, in a bid to reach a solution and restore calm and stability in the camp,” NNA added.

The unrest had erupted on Wednesday following a personal dispute between two men.

Ain el-Hilweh, the largest Palestinian camp in the Lebanon, is home to about 50,000 refugees who live in dire conditions and is known to harbor extremists and fugitives.

Sunnis killing Sunnis. How can we blame Iran?