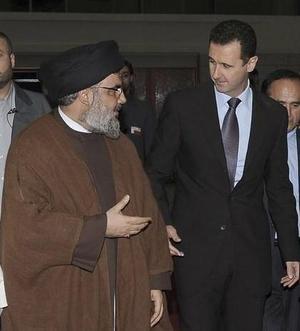 Hizbullah leader Sayyed Hassan Nasrallah discussed with Syrian President Bashar Assad the stance of the Lebanese parliamentary majority from the funding of the Special Tribunal for Lebanon, al-Akhbar daily reported on Thursday.

The newspaper said that Nasrallah visited Damascus around 10 days ago. Discussions between the two men focused on the regional developments and the March 8 forces’ rejection to fund the STL.

Nasrallah and Assad have agreed to take the most appropriate decision on the issue, it said.

But according to al-Akhbar, Assad “did not mind” to fund the tribunal, saying the stability of Premier Najib Miqati’s cabinet was a priority.

His stance comes amid fears that Miqati’s government would collapse if the March 8 forces reject to pay Lebanon’s share to the STL. The PM, President Michel Suleiman and Progressive Socialist Party leader Walid Jumblat are in favor of funding the court.

Assad also stressed to Nasrallah that the protection of the resistance which is being targeted by Western countries is a priority, al-Akhbar said.

But the Hizbullah chief stressed to the Syrian president that his rejection to fund the STL was “a matter of principle linked to the resistance.” The court has indicted four Hizbullah members in the case of ex-Premier Rafik Hariri’s assassination.

Assad then told Nasrallah that he wouldn’t want to interfere in the issue which he considered as internal, saying he would leave it for Hizbullah to take the appropriate decision, al-Akhbar said.

i wish he stayed in syria with his family and friends! take habal hamel and his entourage as well

Assad needs the current Cabinet to protect him.
Miqati will resign if the STL is not funded and the cabinet collapses.

Lets see if Hezbollah bows again. If not, Hezbollah will be signalling it believes the end of Assad is near.

Lebanon needs a real revolution to rid the country of these thugs once and for all.

Marie, or whatever your real name is..

You are entitled to your opinion, no matter how twisted they may be. We are living in a democracy, where people do not get jailed for what they say, or write. However your terminology of 'habal hamel' is derogative and tasteless as it is aimed at a specific group of people who come from a specific region of the country, namely jabal amel. I suggest you think before you type, if you do have a few grey cells between your ears that is.

we experienced mikati b4,he is the same person:
1) he will not fund the STL , and will not resign
2)he will resign only if the financial sector(the banks) are under siege from the international community.
he is foxy enough to play it safe, especially that sunnis are the same...maalech....boukra menchouf....mitl ma allah birid...

Voyager, thanks for your comments. The majority of Lebanese feel the same way.

@mazen, take it easy no one is putting down or insulting Jabal Amel or the Shia here. (I will personally be offended if that happens). The true Jamal Amel is rich in history and should be respected. I m personally against that idiot kid using this name and attacking others because others will attack him back. When I say Habal Hamal I am attacking that loser that uses that name as a code for attacking other religious sects and parties. I hope that explains it.

i must admit mowaten that your last post is funny!

mazen I DO NOT WISH TO LIVE WITH YOUR DEMOCRACY so please return to IRan with all your folks!

Mowaten, you are not that bright are you? I was speaking for my self "allouchi" because I also have called jabal Amal "habal hamal". I only have 1 account by the way and don't give a d#@^%#$ what you think...

allouchi if you get offended then why dont you ever answer the shia-bashing commentors on naharnet who posts their anti shia remarks every day? Stop lying ok. El shi3a tej raskon so your lies dont work on us.

Assad is trying to save the Miqati servant government, he knows that the government is on the verge of collapse once the STL is not funded.

shiites justify the existence of hezbollah as a defender of their rights after being deprived for many years? so in that logic would they accept an armed movement like theirs to defend the people of akkar also deprived of help from the gvt like they were in the south before?

they should say yes if they were logic!

would they accept an armed movment as armed as theirs also from the christians?
they should say yes...

they should accept other communities to have a strong arsenal as theirs in the sake of justice no?

this stupid logic of theirs is a logic of civil war.... and they are proud of it!