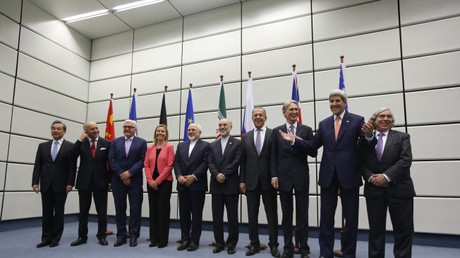 In the nervous aftermath of the Hiroshima bombing 70 years ago, citizens spent decades on alert for a nuclear war that would wipe out billions in a radioactive firestorm and render Earth uninhabitable.

Yet the apocalypse never came.

Instead an unprecedented period of peace took hold between nuclear-armed global powers aware that a wrong move could wipe out the human race.

Nukes could never stop smaller wars and proxy conflicts -- and look increasingly impotent against modern non-state threats such as jihadist groups or cyber-attacks -- but "they are still a necessary tool", said Mark Fitzpatrick, a nuclear security expert at the London-based International Institute for Strategic Studies.

"It is pretty clear that mutually assured destruction has contributed to the absence of global war for the last 70 years," he said.

Nonetheless, as the atomic generation gives way to one that did not grow up building fallout shelters, some experts say nuclear weapons are no longer the ultimate guarantor of global peace.

Growing instability around the world -- the renewed rift between Russia and the West, simmering tensions between nuclear-armed India and Pakistan, a drive by China to modernize its nuclear forces and an ever-more bellicose North Korea -- have undermined efforts to reduce the global stockpile of nuclear weapons and keep doomsday at bay.

With ties between Moscow and the West at Cold War lows, Russia has fallen back on its nuclear threat, boosting its arsenal and increasing flights by strategic bombers, in what NATO has described as "dangerous nuclear saber-rattling".

Nuclear weapons are seen in Moscow as "ultimate proof that Russia is a great power" despite its struggling economy and poor international image, said Pavel Baev, a Russian military expert at the Peace Research Institute Oslo.

He warned that Putin and his top brass had not "gone to the school of nuclear deterrence" and did not understand the "extraordinarily dangerous game" they were playing.

Bruno Tertrais, an expert at the Paris-based Foundation for Strategic Research, said the fear of mutual devastation still made "large-scale military conflict between Russia and NATO unthinkable".

But as weapons spread to more volatile parts of the world, the threat of nuclear war grows.

Fitzpatrick said "it is quite thinkable that there would be a smaller-scale nuclear war involving some of the other countries that are nuclear armed".

He said the most likely confrontation would be between longstanding foes India and Pakistan, which could be enough to create a so-called nuclear winter. In such a scenario, the sun would be blocked out by smoke, causing a devastating cooling of the Earth.

If there were another attack like those in Mumbai in 2008 when Pakistan-based terrorists went on a four-day killing spree in the city, India's government "may not turn the other cheek", he said.

The risk is all the greater as weapons become more powerful.

"A single ballistic missile carries almost three times more nuclear explosive power" than both the bombs dropped by the U.S. on Hiroshima and Nagasaki together, said Steven Starr of the Nuclear Age Peace Foundation.

Other risks for nuclear conflict are the accidental releasing of a bomb, or the "significant possibility" that "a group of six terrorists with the right knowledge could put a bomb together", said Fitzpatrick.

Ward Wilson of the Rethinking Nuclear Weapons Project said the problem with nuclear deterrence was its reliance on individuals remaining rational.

He also warned that "if you wait long enough then a madman will pop up in one of the nine nuclear states".

Such fears have compelled leaders to call for a nuclear-free world.

U.S. President Barack Obama made it an early focus of his foreign policy, warning in a historic 2009 speech in Prague that "as more people and nations break the rules, we could reach the point where the center cannot hold".

But despite going on to seal a new treaty with Moscow to reduce deployed nuclear weapons, his progress has stalled and the U.S. is spending billions upgrading its nuclear arsenal.

"He hasn't had good partners in Russia, in Pakistan, the Senate -- there are reasons why he hasn't been able to make progress," said Fitzpatrick.

Other countries such as France believe nuclear deterrence is more relevant than ever.

"The international context does not allow for any weakness... the era of nuclear deterrence is therefore not over," President Francois Hollande said in February.

Iran's Foreign Minister Mohammad Javad Zarif wrote in The Guardian last week that the concept of mutually assured destruction was "insane" and called for negotiations on a weapons elimination treaty.

But Fitzpatrick says nuclear weapons "are not going away anytime in the foreseeable future... as they are seen as the ultimate insurance protecting national security."

Nuclear pessimists say this means the apocalypse scenario is still on the table.

"It is a miracle the human race has managed to escape the final nuclear war," said Starr.

"Don't count on us making it another 70 years."